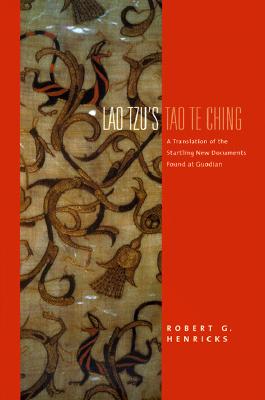 In 1993, an astonishing discovery was made at a tomb in Guodian in Hubei province (east central China). Written on strips of bamboo that have miraculously survived intact since 300 B.C., the "Guodian Laozi," is by far the earliest version of the Tao Te Ching ever unearthed. Students of ancient Chinese civilization proclaimed the text a decisive breakthrough in the understanding of this famous text: it provides the most conclusive evidence to date that the text was the work of multiple authors and editors over hundreds of years, rather than the achievement of a single individual writing during the time of Confucius. Robert Henricks now presents the first English translation of the "bamboo slip Laozi." Differing substantially from other versions we have of the text, the Guodian Laozi provides us with clues on how and when the text came into being. As Henricks's translation shows, many chapters are missing in this form of the text, and some chapters remain incomplete. All of this seems to suggest that the Tao Te Ching was not yet "complete" when these slips were copied. In his translation, Henricks focuses attention on lines in each of the chapters that vary from readings in other editions. In addition, he shows how the sequence of chapters in this form of the text is totally unrelated to the sequence readers commonly see in the "standard" form of the text, i.e., in other translations. Here are just a few of the noteworthy features of this new Tao Te Ching: - A lucid introduction to the Guodian Laozi, offering background on the archaeological interpretation of the discovery - Line-by-line comparisons of the Guodian Laozi against the Mawangdui and Wang Bi editions - Extensive notes on each chapter describing the unique elements of the Guodian Laozi in comparison with other versions - Transcriptions for each chapter, noting both the ancient and modern form of the characters in the chapter - An appendix featuring the official biography of Laozi written by Sima Qian, the Grand Historian of China, as well as Henricks's commentary and notes on this biography This groundbreaking work will lead to a reassessment of the history and significance of this well-known and critical work as well as a reevaluation of the role it played in the development of Taoism in early China.

Robert G. Henricks is a professor of religion at Dartmouth College in Hanover, New Hampshire, where he has taught since 1976. One of the most acclaimed authorities on classic Asian literature today, he has translated the highly regarded Lao-Tzu Te-Tao Ching and is the author of other books, including Philosophy and Argumentation in Third Century China and The Poetry of Han-Shan.