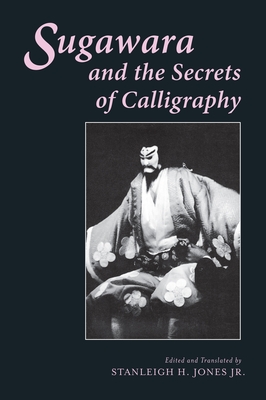 By Stanleigh Jones (Translator)
Email or call for price.

Sugawara and the Secrets of Calligraphy is a classic play from Japan's golden age of puppet theater. Written in the eighteenth century, it tells the tale of Sugawara no Michizane, a wronged scholar-official who, in death, joins the Shinto pantheon as a nurturer of scholarship and calligraphy. The story recounts Sugawara's entanglement with the powerful Fujiwara family, who accuse Sugawara of plotting against the emperor, resulting in his exile and death in 903. After a series of misfortunes befall those who conspired against him, Sugawara's enemies appease his spirit through deification. Sugawara and the Secrets of Calligraphy centers on three archetypical brothers and their wives. Their fates unfold against the intrigues surrounding Sugawara and his foes, which reflect the cultural values of the Edo period woven into a stylized past. This annotated translation by Stanleigh H. Jones Jr. replicates the play's poetic and idiomatic language and its original mix of register while also clarifying the drama's complex story and dialogue for students of Japanese literature and drama. An introduction situates the play within its eighteenth-century context and ninth-century setting and describes the relationship between bunraku puppet theater and kabuki. A unique illustrated appendix delves into the construction of puppets and the art of puppetry.

Stanleigh H. Jones Jr. is professor emeritus of Japanese at Pomona College. He studied Japanese at International Christian University in Tokyo and completed his Ph.D in Japanese literature at Columbia University. He is also the editor and translator of Yoshitsune and the Thousand Cherry Trees and the author of The Bunraku Puppet Theatre of Japan: Honor, Vengeance, and Love in Four Plays of the Eighteenth and Nineteenth Centuries.