Who Was Responsible for the Troubles?: The Northern Ireland Conflict (Hardcover) 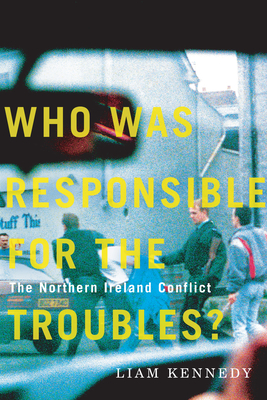 The Troubles claimed the lives of almost four thousand people in Northern Ireland, most of them civilians; forty-five thousand were injured in bombings and shootings. Relative to population size this was the most intense conflict experienced in Western Europe since the end of the Second World War. The central question posed in this book is fundamental, yet it is one that has rarely been asked: Who was primarily responsible for the prosecution of the Troubles and their attendant toll of the dead, the injured, and the emotionally traumatized? Liam Kennedy, who lived in Belfast throughout most of the conflict, was long afraid to raise the question and its implications. After years of reflection and research on the matter he has brought together elements of history, politics, sociology, and social psychology to identify the collective actors who drove the conflict onwards for more than three decades, from the days of the civil rights movement in the late 1960s to the signing of the Good Friday Agreement in 1998. The Troubles in Northern Ireland are a world-class problem in miniature. The combustible mix of national, ethnic, and sectarian passions that went into the making of the conflict has its parallels today in other parts of the world. Who Was Responsible for the Troubles? is an original and controversial work that captures the terror and the pain but also the hope of life and the pursuit of happiness in a deeply divided society.

Liam Kennedy is emeritus professor of history, Queen's University Belfast, and a member of the Royal Irish Academy.

"A work of exceptional frankness ... Kennedy lays out the nature and scale of brutality involved in the Troubles, overseen by a 'black' criminal justice system which was responsible for administering and unspeakable regime of terror on both sides of the s

“Kennedy’s gripping survey has all the dash of the hurlers its Tipperary-born author so admires. Naturally, the man who coined the acronym MOPE (Most Oppressed People Ever) conducts his field court martial of the chief culprits with a sharp eye. As an his

"This book should be read by every impressionable person who dons the green-tinted spectacles from the comfort of their armchair, or those who ignore the factual among the fictional narrative that "war" came to the IRA. ... It is an important addition to

"A provocative, original, and courageous book. Anybody interested in the Northern Ireland Troubles, or in the complex legacies of terrorist violence, should read it." Richard English, author of Does Terrorism Work? A History