Domestic Georgic: Labors of Preservation from Rabelais to Milton (Paperback) 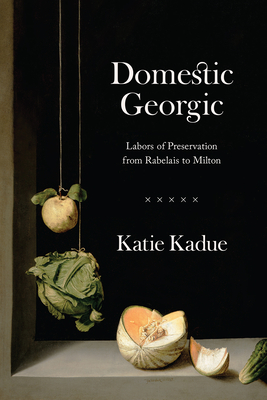 By Katie Kadue
Email or call for price.

Inspired by Virgil’s Georgics, this study conceptualizes Renaissance poetry as a domestic labor.

When is literary production more menial than inspired, more like housework than heroics of the mind? In this revisionist study, Katie Kadue shows that some of the authors we credit with groundbreaking literary feats—including Michel de Montaigne and John Milton—conceived of their writing in surprisingly modest and domestic terms. In contrast to the monumental ambitions associated with the literature of the age, and picking up an undercurrent of Virgil’s Georgics, poetic labor of the Renaissance emerges here as often aligned with so-called women’s work. Kadue reveals how male authors’ engagements with a feminized georgic mode became central to their conceptions of what literature is and could be. This other georgic strain in literature shared the same primary concern as housekeeping: the necessity of constant, almost invisible labor to keep the things of the world intact. Domestic Georgic brings into focus a conception of literary—as well as scholarly and critical—labor not as a striving for originality and fame but as a form of maintenance work that aims at preserving individual and collective life.

Katie Kadue is a Harper-Schmidt Fellow in the Society of Fellows and Assistant Collegiate Professor in the Humanities at the University of Chicago.

“This is a book of luminous intelligence. At once impeccably erudite and highly readable, textually focused and imaginatively wide-ranging, it opens up new ways of understanding not only the early modern texts that are central to Kadue’s argument, but any form of writing where labor is distributed, symbolically or literally, across a gender divide.”
— Terence Cave, St John’s College, University of Oxford

“Kadue teaches her reader to pay attention to metaphors of pickling, maceration, sweeping, tinkering, mending; to quiet the din of warfare and the choir of resurrection, and listen to the burble of cookery and of the hungry body, in their daily rivalry with time. . . . Domestic Georgic will teach scholars and students alike to read in a different register, and its pages are lucid, lively, and shrewd, at once sophisticated and unpretentious.”
— Jeff Dolven, Princeton University

“Where earlier feminist scholars have shown that women’s domestic labor facilitated men’s literary work, here Kadue argues that the method of men’s literary work itself drew on women’s domestic labor. Kadue shows how practices of pickling, fermenting, and preserving make up a surprising pantry of skilled literary techniques. This is work that gives us a recipe to reread the Renaissance.”
— Katherine Ibbett, Trinity College, University of Oxford