The Rights of the Defenseless: Protecting Animals and Children in Gilded Age America (Paperback) 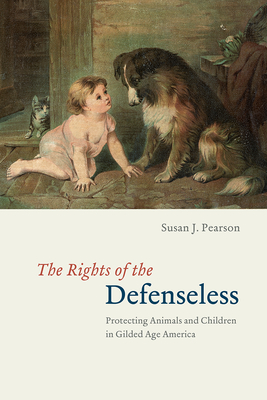 By Susan J. Pearson
Email or call for price.
Usually Arrives in 2-10 Days

In 1877, the American Humane Society was formed as the national organization for animal and child protection. Thirty years later, there were 354 anticruelty organizations chartered in the United States, nearly 200 of which were similarly invested in the welfare of both humans and animals. In The Rights of the Defenseless, Susan J. Pearson seeks to understand the institutional, cultural, legal, and political significance of the perceived bond between these two kinds of helpless creatures, and the attempts made to protect them.

Unlike many of today’s humane organizations, those Pearson follows were delegated police powers to make arrests and bring cases of cruelty to animals and children before local magistrates. Those whom they prosecuted were subject to fines, jail time, and the removal of either animal or child from their possession. Pearson explores the limits of and motivation behind this power and argues that while these reformers claimed nothing more than sympathy with the helpless and a desire to protect their rights, they turned “cruelty” into a social problem, stretched government resources, and expanded the state through private associations. The first book to explore these dual organizations and their storied history, The Rights of the Defenseless will appeal broadly to reform-minded historians and social theorists alike.

“Deftly weaving together analysis and example, The Rights of the Defenseless is an insightful study that will make a significant contribution to our understanding of nineteenth-century reform, the relationship between politics and literature, and the changing meaning of rights in American political discourse. This is a persuasive and compelling work of scholarship.”

“Rights of the Defenseless is an original and insightful work that richly explores rights talk, sentimental culture, and law enforcement in postbellum America. Susan Pearson considers these crucial themes through a most novel topic: how humane societies linked the suffering of animals and children in order to claim the mantle of antislavery reform. Extensive research grounds the vivid elucidation of the relationship between public power and private reform. Rights of the Defenseless is a powerful intervention into scholarly analysis of rights beliefs.”

“The Rights of the Defenseless is much more than an examination of the development of specific policies by humane societies, more than a case study of the emergence of Progressive era reform as it applied to the protection of children and animals.  Rather, Susan Pearson uses the very specific concern with these two forms of dependency to explore the definition of rights in liberal discourse; the boundary between person and animal in modern thought and practice; the symbolic configuration of self and society in nineteenth-century political culture; the emergence of a modern mode of linking feeling to reason to action. I do not think it is too much to say that this book will redefine the understanding of the humanitarian sensibility and its place in modern American culture. This is history as an act of the moral imagination in the very best sense.”

“This insightful examination of private charities being endowed with public power brings a new dimension to the relationship between agencies and governmental protections. . . . This work provides a unique perspective of animal rescue and child saving by linking them to the larger ideas of pet keeping, childhood sacredness, and domestic ideology.”

“Much more than a case study of humane reform, it should be required reading for anyone seeking to understand the humanitarian sensibility and the trajectory of reform responses in modern America.”
— American Historical Review

"Surveying an impressive range of texts, from children's literature to political science, from philosphy to animal training and parenting manuals, Susan J. Pearson provides a dense history of the culture that allowed animals and children to be linked conceptually and politically in the public mind. . . . Pearson's well-supported argument demonstrates clear lines of connection between animal and child protection without reducing the complexity of either. . . ."

“Susan J. Pearson’s The Rights of the Defenseless provides an excellent look at the efforts to protect animals and children from cruelty in the United States between the antebellum and progressive eras. . . . An important contribution to the growing historiography of animals and society.”
— American Nineteenth Century History

“The Rights of the Defenseless is a beautifully crafted, intellectual-cultural history of law and society in the Gilded Age. It provides a novel and persuasive answer to a question that has puzzled scholars of American social welfare since the early twentieth century: why were societies for the prevention of cruelty to animals established before similar child protection associations were created?”
— Journal of the Gilded Age and Progressive Era

“In her elegant book, Susan Pearson examines the many contact points between campaigns to protect children and animals from harm in the nineteenth century. The result is a subtle, illuminating reconsideration of both humanitarianism and liberalism in which anticruelty advocates and organizations intercede between nineteenth- and twentieth-century conceptions of government and citizenship.”
— Historian

“This book is an intellectual and cultural explanation of the forces and ideas propelling Americans toward that more activist and interventionist state. It is compelling and important.”
— Journal of American History

“The Rights of the Defenseless is a thought-provoking and fascinating book, and it is one that deserves a wide readership. Historian of reform, cruelty, rights, and liberalism will find much to like in this book. Fortunately, it is also beautifully written, and readers will find it a pleasure to read.”
— Reviews in American History

“Susan J. Pearson’s remarkable intellectual history of animal and child protection in the Gilded Age . . . illuminates a wider historical sea change in the ways that Americans conceived of the state. In doing so, Pearson links animal and child protection to an astonishing array of social and cultural transformations without recasting the rise of the humane movement in the same teleological language that the protectionists themselves used. . . . Fascinating.”
— H-Net