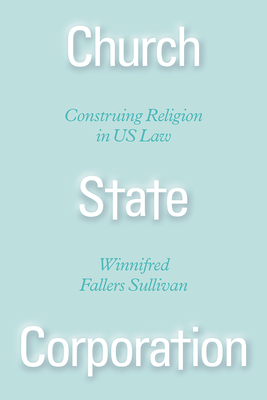 Church and state: a simple phrase that reflects one of the most famous and fraught relationships in the history of the United States. But what exactly is “the church,” and how is it understood in US law today? In Church State Corporation, religion and law scholar Winnifred Fallers Sullivan uncovers the deeply ambiguous and often unacknowledged ways in which Christian theology remains alive and at work in the American legal imagination.

Through readings of the opinions of the US Supreme Court and other legal texts, Sullivan shows how “the church” as a religious collective is granted special privilege in US law. In-depth analyses of Hosanna-Tabor v. EEOC and Burwell v. Hobby Lobby reveal that the law tends to honor the religious rights of the group—whether in the form of a church, as in Hosanna-Tabor, or in corporate form, as in Hobby Lobby—over the rights of the individual, offering corporate religious entities an autonomy denied to their respective members. In discussing the various communities that construct the “church-shaped space” in American law, Sullivan also delves into disputes over church property, the legal exploitation of the black church in the criminal justice system, and the recent case of Masterpiece Cakeshop v. Colorado Civil Rights Commission. Brimming with insight, Church State Corporation provocatively challenges our most basic beliefs about the ties between religion and law in ostensibly secular democracies.

"In Church State Corporation, Sullivan approaches political theology through law, and she takes the intermediary association, shapeshifting between church and corporation, as her primary object of study. . . . While US discussions of law and religion have lazily focused on free exercise and disestablishment, unnecessarily centering imagined sovereigns (state, individual), Sullivan’s work and a growing body of religious studies scholarship pushes in fruitful new directions. . . . Church State Corporation helpfully pushes discussions in the field of political theology to take law seriously and models what that would look like. It also provides an entry point for religious studies scholars to join conversations in political theology without holding their noses."
— Vincent Lloyd

“Church State Corporation investigates the current state of the particularly American field of ‘disestablished’ religion, sweeps aside shopworn discussions of secularization, and draws deeply on theological traditions to confidently map the intersections of law and religion that support so many features of collective life. The erudition on display in Sullivan’s work is stunning, the argumentation laser-sharp, and the question being pursued is original and important.”
— Mathew Scherer, author of Beyond Church and State: Democracy, Secularism, and Conversion

“Church State Corporation will fundamentally refigure conversations about religious establishment in the US. Sullivan’s argument is both admirably urgent and nonpartisan. Anyone concerned with the legal status of religion in both American and international law needs to read this book.”
— Leora Batnitzky, author of How Judaism Became a Religion: An Introduction to Modern Jewish Thought

"In trenchant and gripping prose, Sullivan charts how the ambiguous American ideal of ‘religious freedom’ became the jurisprudential ground on which the unholy trinity of contemporary US society—church/state/corporation—was constructed. Each chapter is a revelation, inviting a fundamental rethinking of the fate of religion in the US public sphere. Sullivan’s call for attention to religious practice and imagination beyond the limits of the ‘religion’ that is legally ‘free’ is a powerful challenge to all interested in the intersection of religion and politics."
— Robert Orsi, author of History and Presence