The Invention of Religion in Japan (Paperback) 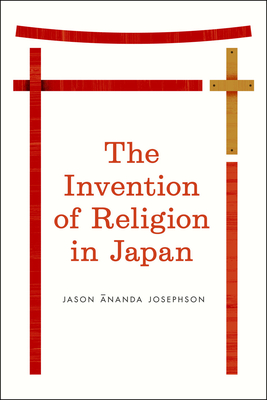 Throughout its long history, Japan had no concept of what we call “religion.” There was no corresponding Japanese word, nor anything close to its meaning. But when American warships appeared off the coast of Japan in 1853 and forced the Japanese government to sign treaties demanding, among other things, freedom of religion, the country had to contend with this Western idea. In this book, Jason Ananda Josephson reveals how Japanese officials invented religion in Japan and traces the sweeping intellectual, legal, and cultural changes that followed. More than a tale of oppression or hegemony, Josephson’s account demonstrates that the process of articulating religion offered the Japanese state a valuable opportunity. In addition to carving out space for belief in Christianity and certain forms of Buddhism, Japanese officials excluded Shinto from the category. Instead, they enshrined it as a national ideology while relegating the popular practices of indigenous shamans and female mediums to the category of “superstitions”—and thus beyond the sphere of tolerance. Josephson argues that the invention of religion in Japan was a politically charged, boundary-drawing exercise that not only extensively reclassified the inherited materials of Buddhism, Confucianism, and Shinto to lasting effect, but also reshaped, in subtle but significant ways, our own formulation of the concept of religion today. This ambitious and wide-ranging book contributes an important perspective to broader debates on the nature of religion, the secular, science, and superstition.

Jason Ānanda Josephson Storm is chair and professor of religion and chair of science and technology studies at Williams College. He is the author of The Invention of Religion in Japan and The Myth of Disenchantment: Magic, Modernity, and the Birth of the Human Sciences, both also published by the University of Chicago Press.

“Jason ­Ananda Josephson astutely analyzes how Japanese definitions of religion sought to contain Christian missionary agendas and to position Japan advantageously vis-à-vis Western nations while at the same time radically reconfiguring inherited traditions and articulating new ideological norms for Japanese citizens. His broad erudition allows him to place the case of Japan in transnational perspective and to offer persuasive theoretical insights into the mutually constitutive nature of religion, superstition, and the secular. This study is illuminating reading for anyone interested, not only in modern Japan, but in the complex interconnections of religion, modernity, and the politics of nation states.”
— Jacqueline Stone, Princeton University

“The Invention of Religion in Japan is truly revolutionary. Original, well-researched, and engrossing, it overturns basic assumptions in the study of Japanese thought, religion, science, and history. Jason ­Ananda Josephson comes up with a provocative and convincing new way to look at what has commonly been seen as religion in Japan. This book will absolutely reshape the field.”
— Sarah Thal, University of Wisconsin–Madison

“Written with remarkable clarity, this book makes an excellent contribution to the study of the interface of traditional Japanese religions and politics. Highly recommended.”
— Choice

“The range of Japanese primary sources consulted in his book is prodigious, as is his familiarity and usage of multidisciplinary theoretical works. . . . Josephson has used well-documented examples of the creation of various Japanese belief systems in the modern era to suggest a new model for understanding the colonial past of religious studies and to provide new tools and models for grappling with continuing change in religious studies theory. . . . Josephson’s book is erudite, informative, and interesting. It should be a worthwhile read for Japan scholars as well as scholars and students interested in religious studies theory and history.”
— H-Shukyo

“Josephson’s book is a highly insightful and ingenious application of the constructivist approach to religion—the method of reverse-engineering the clockwork that makes the concept tick in particular historical and cultural cases. . . . By putting the stress on invention, Josephson foregrounds this backstage business of making, and in doing so, he demonstrates, to brilliant effect, the novelty and power of the products that resulted. . . . Josephson’s book will no doubt be generating further exciting inventions for some time to come.”

“Jason A¯nanda Josephson’s book on the ‘invention of religion’ is an informative, well-argued, and stimulating discussion of an important topic that should be fascinating to anyone interested in religion in modern Japan or religion in any historical or cultural context.”

“Jason Josephson’s The Invention of Religion in Japan offers a creative theoretical apparatus that many students of Japanese religion and history will find immediately useful. . . . Josephson boasts a formidable linguistic skill set and a corresponding fluency with theoretical material; he puts both to extensive use in this wide-ranging book. . . . Josephson upends the familiar Saidian account of Europe’s masterful encounter with the passive ‘Orient,’ showing that Japanese interpreters played active roles in formulating European understandings of the new academic field of ‘Japanese religions.’”

“Josephson admirably traces the development of ‘religion’ in Japan and the West, and he constantly reminds of how this invention was inextricably interwoven with international politics and diplomatic relationships. . . . Josephson presents a sophisticated analysis of the invention of religion in Japan by applying theoretically and empirically based explanations that rely on primary source data in multiple languages to contest previous notions of ‘religion’ and assumptions within the academic study of religion. In that respect, The Invention of Religion in Japan can help scholars of religions in Japan and elsewhere continue to refine and shape our understanding of ‘religion’ in modernity.”

— Journal for the Scientific Study of Religion

“This book is an advance in the literature. Tightly edited, it synthesizes a heavy mass of information and uses judicious combinations of primary, secondary, and theo retical literature to tell its story. The author’s linguistic abilities are exceptional, and he has done deep background research into varied European and Japanese literatures that help him address the various specific problems raised in his enterprise. Readers who are not Japan specialists will find the issues framed by interesting anecdotes and well-chosen historical information.”
— Journal of Religion in Japan

“The book is a linguistic and textual tour de force that challenges many preconceptions about the development of studies of religion in Japan as well as about religion as a defined, or definable, category in Japanese contexts. Its thesis, that “religion” as a conceptual category did not exist prior to Western incursions into Meiji Japan and that it thus needed to be invented by the Japanese, is argued convincingly and will make many who have held alternative viewpoints think again. Josephson also offers some new insights into the contentious terminology of the religious and the secular by focusing on Japanese concerns with heresy and “superstition,” which were critical definitional categories through which the “religious” and the “secular” were framed. . . . One hopes very much that people outside of religious studies do not look at Josephson’s title and think this is a book solely about religion. Indeed, it would not have been amiss to have titled the book “Politics, Diplomacy, and the Invention of Religion,” for it is as much of relevance to students of politics, diplomacy, international relations, and law as it is to those of religious studies.”
— Ian Reader

“Theoretically sophisticated and intellectually ambitious, Josephson’s book challenges the long-held assumption that religion is a universal component of human experience….Josephson’s work is a skillful exercise in semiotic analysis, drawing on sources in Japanese, Chinese, Portuguese, French, German, Dutch, Norwegian, Spanish, and Italian, and it illuminates the role of the Japanese as observers of the West, not merely as objects of Western observation….In this way, Josephson uses the transnational approach not only to revise a long-standing problem in Japanese historiography but also to deconstruct hegemonic Western concepts.”

“Josephson weaves together a fresh narrative of Japanese nation-building in its relation to religion. . . . Sophisticated yet highly readable, The Invention of Religion in Japan will be edifying reading for general readers and students as much as for specialists.”

“[C]onvincingly describe[es] the reception of the term ‘religion’ in Japan not as an ‘imposition’ and thus passive reception of a foreign concept but as an active and deliberate acquisition. . . . [Josephson] does a brilliant job in showing how ‘religion’ was used by state officials, scientists, and other protagonists in late 19th-century Japan as exactly what it is: a free-floating signifier with a strong discursive force that can be of great use for different processes of negotiation and naturalization.”

"This is an important book. . . . It requires us to rethink how we understand and classify Shinto, Buddhism, Confucianism, and Christianity in both premodern and modern settings. . . . [Josephson's] analysis of Japan is Foucauldian in virtually every dimension—not only of its religion, but also of its use of knowledge as power and of the 'disciplining of bodies' by authorities through regimens on hygiene, mental illness, sexual deviance, and imprisonment."

“Presents an exciting challenge to the field of Japanese religious studies. . . . Josephson sheds much light on how the Western category of religion was adapted, interpreted, and transformed in Japan at the turn of the twentieth century. . . . A powerful addition to the field and a must-read.”

“An important contribution. . . . Studies such as Josephson’s . . . that examine classification as a collaborative, situationally-specific exercise linked not just to ideas but to social interests, legal systems, and administrative structures . . . are an important corrective to those who understand situations of contact as merely involving the passive vanquished simply doing the bidding of invading conquerors.”

“The book brilliantly weaves two genealogies of scholarship, making it deeply interesting to students of either one: studies examining the construction of State Shinto in the Meiji period as a nonreligious expression of modern Japanese identity with a generation of critical scholarship on the academic study of religion. . . . [Josephson] has produced an elegant argument that religion (including its co-products, the secular and the superstitious) was not so much imposed on Japan, but rather, in the discursive gap created by Western missionary and diplomatic incursions, invented in Japan by the Japanese to serve the late nineteenth-century modernization project. In short, the book describes, in far-ranging discussions, how religion became the first modern manufactured product with the origin label ‘Made in Japan.’”

“Josephson’s investigation of the category of religion as it developed in modern Japan is a helpful addition to the field, and, to be honest, I have already begun assigning it in seminars. . . . This book [will be] useful in comparative and theoretical courses on religion and will no doubt appeal to anyone studying Japanese religions and Japanese history. . . . One of his most useful contributions is the use of the trinary model of ‘real,’ ‘superstition,’ and ‘religion’ to understand how the modern worldview is enacted and created. Moreover, his consideration of diplomacy and domestic law as key factors in the construction and negotiation of conceptual categories will be of interest to scholars in many fields. I highly recommend this book.”

"Although his book is a historical study, the points Josephson makes about the 'invention of religion' in the Meiji period are still crucial even in the context of today’s Japan....Josephson offers a provocative and insightful contribution to the field and deserves to be read not only by those who are interested in historical research, but also for its deeper reflection about contemporary issues regarding religions in Japan.”