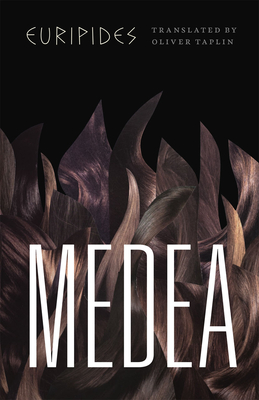 By Euripides, Oliver Taplin (Translated by)
Email or call for price.

In the centuries since it was first performed, Euripides’s Medea has established itself as one of the most influential of the Greek tragedies. The story of the wronged wife who seeks revenge against her unfaithful husband by murdering their children is lodged securely in the popular imagination, a touchstone for politics, law, and psychoanalysis and the subject of constant retellings and reinterpretations.

This new translation of Medea by classicist Oliver Taplin, originally published as part of the acclaimed third edition of Chicago’s Complete Greek Tragedies, brilliantly replicates the musicality and strength of Euripides’s verse while retaining the play’s dramatic and emotional impact. Taplin has created an edition of Medea that is particularly suited to performance, while not losing any of the power it has long held as an object of reading or study. This edition is poised to become the new standard, and to introduce a new generation of readers to the heights and depths of Greek tragedy.

Oliver Taplin is professor emeritus of classics at the University of Oxford.

“Lively. . . . Tragedy's (and comedy's) alternation of speech and song provide the . . . fundamental rhythmic dynamic, and a good translator will use different registers to capture this alternation. Here, Taplin is very successful, and many passages in the odes convey both the intensity of the lyric mode and the contrast with the spoken rhythm that precedes and follows.”
— Bryn Mawr Classical Review

“Euripides’s influential and provocative Medea continues to be read, performed, adapted, and reinterpreted in multiple contexts across the globe. Taplin’s accessible and performable, yet vivid and poetic translation makes the play available to a modern audience while doing justice to both its complexities and its horrific power.”
— Helene P. Foley, Barnard College, Columbia University

“Taplin translates Medea into clear and contemporary English while reflecting well the different registers and tones that create the subtle texture of Greek tragedy. His version is eminently speakable, but also highly faithful to the original Greek, making it ideal for instructors and readers who want to study closely the specific metaphors and terms that carry the classic themes of this influential drama.”
— Donald J. Mastronarde, University of California, Berkeley