Blue Notes in Black and White: Photography and Jazz (Paperback) 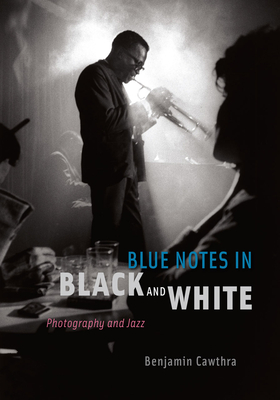 By Benjamin Cawthra
Email or call for price.

Miles Davis, supremely cool behind his shades. Billie Holiday, eyes closed and head tilted back in full cry. John Coltrane, one hand behind his neck and a finger held pensively to his lips. These iconic images have captivated jazz fans nearly as much as the music has. Jazz photographs are visual landmarks in American history, acting as both a reflection and a vital part of African American culture in a time of immense upheaval, conflict, and celebration. Charting the development of jazz photography from the swing era of the 1930s to the rise of black nationalism in the ’60s, Blue Notes in Black and White is the first of its kind: a fascinating account of the partnership between two of the twentieth century’s most innovative art forms. Benjamin Cawthra introduces us to the great jazz photographers—including Gjon Mili, William Gottlieb, Herman Leonard, Francis Wolff, Roy DeCarava, and William Claxton—and their struggles, hustles, styles, and creative visions. We also meet their legendary subjects, such as Duke Ellington, sweating through a late-night jam session for the troops during World War II, and Dizzy Gillespie, stylish in beret, glasses, and goatee. Cawthra shows us the connections between the photographers, art directors, editors, and record producers who crafted a look for jazz that would sell magazines and albums. And on the other side of the lens, he explores how the musicians shaped their public images to further their own financial and political goals. This mixture of art, commerce, and racial politics resulted in a rich visual legacy that is vividly on display in Blue Notes in Black and White. Beyond illuminating the aesthetic power of these images, Cawthra ultimately shows how jazz and its imagery served a crucial function in the struggle for civil rights, making African Americans proudly, powerfully visible.

Benjamin Cawthra is associate professor of history and associate director of the Center for Oral and Public History at California State University, Fullerton.

“In Blue Notes in Black and White you sense an author consumed and excited by his subject. He’s synthesized loads of the literature and argument around jazz, and he builds particularly on recent works of historiography.”

“Bold, ruminative and personal, jazz music poses a challenge to the ace lensman that is answered repeatedly in these pages. Namely, how to capture the elusive internal make-up of any given jazz musician in a two-dimensional image that acts as a portal to the artist’s soul. . . . Ideal reading while spinning Monk or Kind of Blue. Four stars.”
— Colin Fleming

“Cawthra brings a deep appreciation for jazz and the photography that captured the ecstasy of the music and performing and the disappointments felt by black musicians subject to race discrimination and personal demons.”
— Booklist

“This is a highly engaging and deeply engaged meditation on the development of the modern jazz photography tradition. Cawthra’s probing analysis of how ‘the photographic culture of jazz’ helped make jazz visible perceptively illuminates and contributes significantly to the fascinating, revealing, and ongoing debate surrounding not just the jazz image, notably the African American jazz image, but also jazz history, the meanings of jazz, and indeed the role of jazz in the making of modern American culture.”
— Waldo E. Martin, Jr.

“This first in-depth history of jazz photography provides the reader with a three-dimensional view of its fascinating subject, illuminating the music, the media, and the makers—the foreground and the background.”
— Dan Morgenstern

“Benjamin Cawthra, writing with grace and a formidable command of jazz history and American culture, makes us see the sounds, the social relations, and the myths of jazz as he ably uncovers the personal and institutional networks of musicians, writers, magazines, and record companies in which jazz photography developed. Even as Blue Notes in Black and White casts a sharp eye on photographic aesthetics—its pages brim with bracing insights into Gjon Mili’s informal but magisterial style, Francis Wolff’s use of chiaroscuro, and Herman Leonard’s concept of the sculpted face—it also works as a groundbreaking history of jazz criticism. At its best, this excellent book serves as a model for a multisensory music criticism: while reading it, I often felt I was hearing the music more deeply.”

“Cawthra traces the history of jazz photography from the 1930s to the 1960s through the stories of prominent, mainly African-American musicians (Miles Davis, John Coltrane) and the white men who photographed them for magazines and album covers.. . Analyzing photographs can get tedious quickly, but Cawthra wisely contextualizes them with anecdotes and stories that place the reader in the moment.”
— Zócalo Public Square