The Sounding of the Whale: Science and Cetaceans in the Twentieth Century (Paperback) 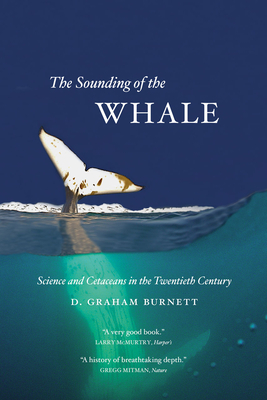 By D. Graham Burnett
Email or call for price.

From the Bible’s “Canst thou raise leviathan with a hook?” to Captain Ahab’s “From Hell’s heart I stab at thee!,” from the trials of Job to the legends of Sinbad, whales have breached in the human imagination as looming figures of terror, power, confusion, and mystery.

In the twentieth century, however, our understanding of and relationship to these superlatives of creation underwent some astonishing changes, and with The Sounding of the Whale, D. Graham Burnett tells the fascinating story of the transformation of cetaceans from grotesque monsters, useful only as wallowing kegs of fat and fertilizer, to playful friends of humanity, bellwethers of environmental devastation, and, finally, totems of the counterculture in the Age of Aquarius. When Burnett opens his story, ignorance reigns: even Nature was misclassifying whales at the turn of the century, and the only biological study of the species was happening in gruesome Arctic slaughterhouses. But in the aftermath of World War I, an international effort to bring rational regulations to the whaling industry led to an explosion of global research—and regulations that, while well-meaning, were quashed, or widely flouted, by whaling nations, the first shot in a battle that continues to this day. The book closes with a look at the remarkable shift in public attitudes toward whales that began in the 1960s, as environmental concerns and new discoveries about whale behavior combined to make whales an object of sentimental concern and public adulation.

A sweeping history, grounded in nearly a decade of research, The Sounding of the Whale tells a remarkable story of how science, politics, and simple human wonder intertwined to transform the way we see these behemoths from below.

D. Graham Burnett is professor of history and history of science at Princeton University, where he teaches in the Interdisciplinary Doctoral Program in the Humanities, and directs graduate studies in the Program in History of Science. He is an editor at Cabinet magazine and the author of four books.

"A sweeping, important study of cetacean science and policy. . . . [Burnett] spent a decade poring over thousands upon thousands of pages scattered in far-flung archives. If the whale swallowed Jonah whole, then Burnett has made a considerable effort to get as much of the whale as possible down his voluminous intellectual gullet. . . . A reviewer pressed for time could, in lieu of an essay, put together a very respectable (or at least very weird) collage of all the 'you're kidding me, right?' facts about whales and whaling that appear on almost every one of Burnett's information-soaked pages. . . . A gifted and often very funny writer, Burnett bristles at the restrictions of academic rigor but does not abandon them. . . . His greatest service is to tell a story that helps us understand the present-day political obstacles to addressing key environmental questions."

“The wait is over. We finally have a comprehensive, brilliantly written chronicle of science in the history of whaling—or whaling in the history of science. Graham Burnett’s leviathanic opus covers everything you ever wanted to know—or didn’t know you wanted to know—about the biology, conservation, politics, and history of what is perhaps man’s most troubled relationship with wild animals. This masterly study eclipses every cetological work that precedes it. Well, maybe not Moby-Dick.”

"In the bright new age of whale science, Graham Burnett's astounding and wide-ranging report from the front lines of cetacean studies is hugely welcome. Rooted in historical fact, political, philosophical and scientific analysis, it lays out the sorry story of the interaction of humans and whales in an era which redefined the ever uneasy meeting of natural and human history. By turns enlightening, lively and disturbing, always intuitive and drawing on a wealth of knowledge as vast as its subject, Burnett’s book is set to become a new high water mark in a still unfolding story."

— Philip Hoare, author of The Whale

"It is tempting to use big words to describe this big book--and Burnett's The Sounding of the Whale is big in terms of both size and importance. In his investigation of the creation of knowledge about whales, Burnett offers a uniquely fertile avenue into the fraught topics of modern whaling, science-based regulation, and the dramatic shift in the cultural meanings of whales during the twentieth century. The volume itself offers eloquent testimony to the centrality of historical narrative for understanding the relationship between science and regulation. Yet, despite the lesson that complexity and distinctiveness matter, deeply, for the particular case of twentieth-century whaling, Burnett’s study also illuminates durable characteristics of science-based regulation and provides analytical context for current controversies such as the scientific whaling exception or the concept of 'scientific uncertainty.' Historians of various stripes, those who study science, the environment, politics, or culture, will find this invaluable study worthy of careful and considered attention, but so will environmental activists, political scientists, and people concerned with the history and fate of the largest creatures on our planet and their smaller marine mammalian brethren.  To use little words to describe a big book, Burnett's The Sounding of the Whale is great."

"This wonderful book documents the interplays among science, conservation and politics in the evolving career of the whale over the last century, with bravura, insight and wit, as has never been done before. Using a narrative style, it explores the thoughts and trials of the men behind the origins and activities of the Discovery Investigations, the International Whaling Commission and the save-the-whale movement. It's scholarly history that reads like a good novel--Harmer, Kellogg, Mackintosh, Lilly, and more; they're all here, in full. The language is marvelous: original and eloquent."

"In the early twentieth century, whale biology was restricted to the flensing decks of factory ships, where scientists were in danger of being sucked 'into the belly of the beast' of modern whaling. Graham Burnett artfully renders the history, and the often fractious relationship, between biologists and whalers; I felt as if I had discovered a trail of ambergris meticulously arrayed along the shores of twentieth-century cetology. The Sounding of the Whale is a work of stunning scholarship and a bracing read."

"By questioning the very nature of our scientific interest in the whale, Burnett has set the tone for a new century of discovery—and, one hopes, recovery. . . . A history of breathtaking depth."
— Nature

"In other hands it might have yielded a story as dry as dust, but this historian has an eye for small, telling details, resulting in an intriguing book full of paradoxes and unlikely heroes."

"The heft of The Sounding of the Whale does not weigh it down, not least because Burnett takes the reader on some wonderfully strange detours. Like one of the flensers, who carved the blubber off whales, Burnett scrambles and rappels across the living and dead bodies of his subjects with aplomb."

"Burnett's brilliant and often wryly humorous study stands as a testament to the uneasy role of science in the stand-off between human history and natural history."
— Philip Hoare

“A history of breathtaking depth. . . . The Sounding of the Whale offers a telling reminder of just how much ideas matter, literally and figuratively, in the material relationships that bind the lives of humans to other animals with whom we share Earth."

"A remarkable book, an astounding piece of research. . . . This is a major work in the history of science, but it is also an environmental history, a study in decision-making and a contribution to the growing genre of ocean history."
— David Blackburn

"Overall, The Sounding of the Whale amounts to a stinging criticism of science and its methods, and should provide a basis for reflection among professional scientists from all disciplines about how they should play their role in society."
— Times Literary Supplement

"At once original, insightful, wide-ranging, and provocative, The Sounding of the Whale is a marvelously engrossing work of high scholarship and enduring worth."