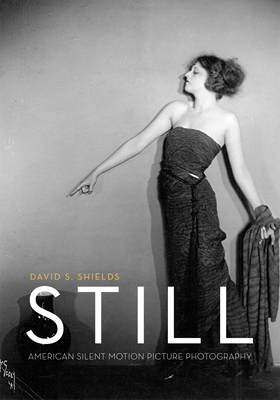 By David S. Shields
Email or call for price.

The success of movies like The Artist and Hugo recreated the wonder and magic of silent film for modern audiences, many of whom might never have experienced a movie without sound. But while the American silent movie was one of the most significant popular art forms of the modern age, it is also one that is largely lost to us, as more than eighty percent of silent films have disappeared, the victims of age, disaster, and neglect. We now know about many of these cinematic masterpieces only from the collections of still portraits and production photographs that were originally created for publicity and reference. Capturing the beauty, horror, and moodiness of silent motion pictures, these images are remarkable pieces of art in their own right. In the first history of still camera work generated by the American silent motion picture industry, David S. Shields chronicles the evolution of silent film aesthetics, glamour, and publicity, and provides unparalleled insight into this influential body of popular imagery. Exploring the work of over sixty camera artists, Still recovers the stories of the photographers who descended on early Hollywood and the stars and starlets who sat for them between 1908 and 1928. Focusing on the most culturally influential types of photographs—the performer portrait and the scene still—Shields follows photographers such as Albert Witzel and W. F. Seely as they devised the poses that newspapers and magazines would bring to Americans, who mimicked the sultry stares and dangerous glances of silent stars. He uncovers scene shots of unprecedented splendor—visions that would ignite the popular imagination. And he details how still photographs changed the film industry, whose growing preoccupation with artistry in imagery caused directors and stars to hire celebrated stage photographers and transformed cameramen into bankable names. Reproducing over one hundred and fifty of these gorgeous black-and-white photographs, Still brings to life an entire long-lost visual culture that a century later still has the power to enchant.

“Still is not just a labor of love or the fruit of a personal passion. It’s not just an astonishing album of ‘beauty’ and beauty. In the process it amounts to one of the most radical reappreciations of the origins of film we have ever had. For what starts as a collector’s rapture turns into a surprising and creative evocation of what silent movies looked and felt like. This is a piece of history, lavishly illustrated, but it is a serious contribution toward the history of film, too.”

— David Thomson, author of The New Biographical Dictionary of Film

“Still photography played an integral part in all aspects of the silent film industry, from photos of stars and productions to the entire technical advancement of the medium. This study of American silent era stills is extremely important for anyone interested in the histories of cinema and photography.”
— Marc Wanamaker, film historian and founder of Bison Archives

“Still meticulously and sure-footedly juggles many tasks at once to encompass a number of matters crucial to an understanding of the history of the use of still and portrait photography in conjunction with silent films—including the development of commercial portraiture, the use of photographs by magazines and newspapers, the history of censorship of the arts in America, and more. David S. Shields has done a heroic amount of research, in many cases tracking down lives that seem to have scarcely been chronicled before. A major accomplishment, Still opens entire new worlds in the history of photography.”
— Luc Sante

“David S. Shields’ appropriately photo-packed history of the nascent days of movie publicity—the first photographers to capture silent screen stars on set, on the backlot, in candid settings and staged studio portraits—offers far more than just an amazing collection of images. So many films from the early decades of the 20th century have been lost, but here, miraculously, they can be found again. . . . A truly major achievement.”
— Philadelphia Inquirer

“In his richly illustrated Still: American Silent Motion Picture Photography, David S. Shields examines the groundbreaking work of the early cinematographers and still photographers who created that phenomenon. Shields is both scholarly and deeply passionate about the pictures (some from his own collection), gathering rare images from the sets of epic costume dramas and the kind of celebrity portraiture that would reach its ultimate expression generations later in Vanity Fair and Rolling Stone.”
— Los Angeles Times

“This book is both an account of the still photography of the silent era and a collection of enthralling images.”

“One opens this book with exquisite care and almost a hush of awe. Exploring the work of over sixty camera artists, Shields has pulled together a beautiful collection of photographic stills and portrait photography from the American silent film era of 1908 and 1928 that chronicles the fascinating intersection between the two art forms of the moving image and commercial photography. . . . Shields’s presentation entrances as he weaves his own spell of their contributions. Not only does one exclaim in reading this amazing work that Hollywood stars had faces then, but that they also had photographic artists who created the icons that linger and enchant.”

“The detailed profiles of so many photographers are the book’s triumph. . . . Not just a reappraisal of a collection of daring, innovative artisans, Shields’s book makes all too apparent how bland and safe contemporary movie stills and portraits really are.”