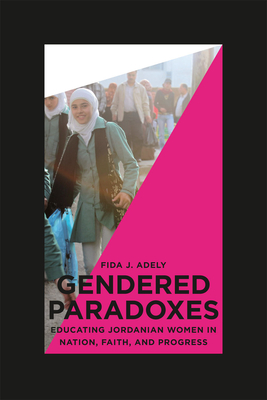 By Fida Adely
Email or call for price.
Not Currently Available Through Reach and Teach

In 2005 the World Bank released a gender assessment of the nation of Jordan, a country that, like many in the Middle East, has undergone dramatic social and gender transformations, in part by encouraging equal access to education for men and women. The resulting demographic picture there—highly educated women who still largely stay at home as mothers and caregivers— prompted the World Bank to label Jordan a “gender paradox.” In Gendered Paradoxes, Fida J. Adely shows that assessment to be a fallacy, taking readers into the rarely seen halls of a Jordanian public school—the al-Khatwa High School for Girls—and revealing the dynamic lives of its students, for whom such trends are far from paradoxical. Through the lives of these students, Adely explores the critical issues young people in Jordan grapple with today: nationalism and national identity, faith and the requisites of pious living, appropriate and respectable gender roles, and progress. In the process she shows the important place of education in Jordan, one less tied to the economic ends of labor and employment that are so emphasized by the rest of the developed world. In showcasing alternative values and the highly capable young women who hold them, Adely raises fundamental questions about what constitutes development, progress, and empowerment—not just for Jordanians, but for the whole world.

Fida Adely is assistant professor and Clovis and Hala Salaam Maksoud Chair in Arab Studies at the Center for Contemporary Arab Studies in the School of Foreign Service at Georgetown University.

“Time and time again, media outlets conjure images of Arab women who need saving and empowering via the education and development initiatives of the Western world and international organisations such as the World Bank and the United Nations. Fida Adely's close-focus examination of the education of young women in the Middle East moves away from such generalisations and stereotypes, and instead thoughtfully analyses the nuances and complexities of the everyday lives of a group of young women at al-Khatwa Secondary School for Girls in Bawadi al-Naseem, Jordan. The result is a breath of fresh air in an area dominated by sweeping terminology and homogeneity in descriptions of women in the Arab world. I found Gendered Paradoxes an exciting addition to a limited body of literature and one that is sure to shift perceptions of women's schooling in the region.”
— Carine Allaf

“Energetic, highly readable exploration of identity politics in a young nation. . . . While Gendered Paradoxes offers a revealing look at the lives of Jordanian girls and women, it also forces us ‘Western’ women to hold the mirror up to ourselves. The book serves as a reminder that the so-called culture clash between the ‘Occident’ and ‘Orient’ is less about meaningful differences and more about the constructs that prevent us from acknowledging our similarities.”
— Mya Guarnieri

“Gendered Paradoxes critiques misconceptions of Jordanian (and, by extension, Arab and Muslim) women as being overwhelmingly held back by their families and culture. While not denying the persistence of patriarchal structures, Adely’s research clearly refutes the notion that girls typically see their families or future marriage as obstacles to fulfillment, or that they are discouraged from higher education by their kin. On the contrary, the book presents many examples of families scraping together their meager resources to send their daughters to university, and a number of instances of husbands doing the same for their young wives. . . .     Gendered Paradoxes is written in an engaging, very readable style, giving a tangible sense of the changes and diversity in Jordanian society and culture which are readily apparent, even in a provincial town. It marks a refreshing departure from the usual lenses for viewing the country either from Amman’s modernity or based on the Bedouin past. Arguably, this also means that its findings are more representative.”
— Sally Bland

“In Gendered Paradoxes, Fida J. Adely provides an ethnographically vivid account of the education of young women in a Jordanian high school, capturing the complex interplay between the demands of the state, the discourse on progress and pietism, and the imaginings and agency of the girls and their families. . . . Adely’s book continues a rich tradition of anthropological scholarship in the Middle East that seeks to challenge knowledge that neglects the region’s heterogeneity or the subtleties of daily life.”
— Bruce Burnside

“Adely writes with astonishing clarity. She delivers several striking blows to the reigning development narratives in subtle but damaging ways. She also rejects the common portrayal that women in the Middle East are ‘oppressed, weak and passive victims.’ Her voice is neither angry, nor polemical; it is one of a very measured academic. The book’s personal narratives and profiles on individual girls are very refreshing. It is this very complexity of adolescent life conveyed by Adely which builds a common undercurrent to the experiences of women the world over. Perhaps its greatest triumph is in showing how reports that lack qualitative evidence may end up enforcing development narratives that don’t ring true in every country; and so Adely plays her battle drum to the tune of nuance, nuance, nuance.”
— Cheryl Brumley

“Adely’s book is an innovative study in the field of the anthropology of the Arab world helping readers to grasp the complexity of women’s lives in a rapidly changing cultural, social, and economic landscape where different instances and contradictory models unpredictably shape individual and collective lives.”

“Adely offers an exceptionally comprehensive analysis and theoretically sound ethnography on the role of schools in preparing young women for their lives in Jordanian society. She challenges the mainstream precepts of international development and progress while beautifully portraying the students of al-Khatwa school as being actively engaged in defining their roles within Jordanian society on their own terms and according to their cultural beliefs. These girls are not passive, nor are they oppressed. They struggle with the day-to-day complexities of life and adolescence as young girls anywhere in the world do.”

“Fida Adely’s careful ethnography of Jordanian high schools is a pleasure to read. It is a sensitive account of young women’s everyday lives in a provincial Jordanian town and their struggles with the questions and anxieties of growing up, facing uncertain economic situations, coming to terms with class distinctions, and contending with expectations of appropriate gendered behavior and shifting understandings of piety. . . . a wonderfully careful, honest, and rich appraisal of everyday life, struggles, and growing up.”

“In Gendered Paradoxes, Fida Adely develops brilliantly the work of a new generation of scholars on women in the Middle East. Her concern with adolescent girls in school is original and most timely. Adely gives us a unique glimpse at the girls struggling intellectually and emotionally with their conditions, and particularly with all the possibilities and constraints Islam gives them. This work should put to rest the notion that people in the Middle East, and particularly women, are homogeneous or uncritical in their allegiances. Policy makers should pay attention.”
— Hervé Varenne, Columbia University

“Gendered Paradoxes is a path-breaking study that challenges orthodoxies about women, education, and development in the Arab world (and elsewhere). Unique in the balance it strikes between sophisticated analysis and engaging ethnography, it opens our eyes both to the complexity of real girls’ experiences of schooling in Jordan and the flaws in standard theories about why education matters.  By far the best analysis of contemporary Jordanian society and culture I have read—taking on sensitive issues of family, nationalism, religion, and morality—this lucid book will become a classic. One can hope that it will also transform debates about gender and development.”

“Focusing on the understudied country of Jordan and the infrequently addressed issue of the education of youth in the Middle East, Gendered Paradoxes explores schools as sites for competing visions, expectations, dreams, and aspirations related to the meaning of womanhood, marriage, love, respectability, and morality. Fida Adely forcefully takes us beyond the view of the Arab woman as a ‘passive’ and ‘oppressed’ victim, sharing with us the words and experiences of a strong and vibrant group of young women who are actively working with and against contradictory and ambiguous norms that define notions of success, respectability, progress, and happiness.”