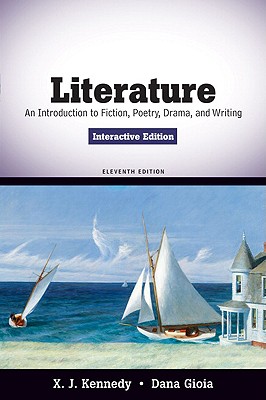 The most popular introductory anthology of its kind, Kennedy/Gioia's "Literature" continues to inspire people with engaging insights on reading and writing about stories, poems, and plays. "Literature, Interactive Edition," "11/e" comes automatically with a specialized version of MyLiteratureLab, Longman's multimedia website designed specifically for Kennedy/Gioia users. MyLiteratureLab icons are found in the margins of the text along with a list of media assets at the front of the anthology. Poets in their own right, editors X. J. Kennedy and Dana Gioia bring personal warmth and a human perspective to this comprehensive anthology. "Literature, " "Interactive Edition," "11/e," presents readable discussions of the literary devices, illustrated by engaging works, supported by useful writing tips, and followed by seven chapters devoted to writing that have been thoroughly updated to reflect MLA's latest guidelines. Conversations between Dana Gioia and celebrated fiction writer Amy Tan, current U. S. Poet Laureate Kay Ryan, and contemporary playwright David Ives, offer readers an insider's look into the importance of reading to three contemporary writers. A Latin American Writers casebook is new to Fiction and collects some of the finest authors from the region including Octavia Paz, Gabriel Garcia Marquez, and Ines Arendondo. A casebook on Nathaniel Hawthorne's "Young Goodman Brown" is now featured as part of the Three Stories In-depth chapter. Many new writers have been added including Naguib Mahfouz, Virginia Woolf, Sherman Alexie, Mary Oliver, Bettie Sellers, and Anne Deavere Smith For anyone who enjoys literature presented with personal warmth and a human perspective.

"X. J. Kennedy," after graduation from Seton Hall and Columbia, became a journalist second class in the Navy ("Actually, I was pretty eighth class"). His poems, some published in the "New Yorker," were first collected in "Nude Descending a Staircase" (1961). Since then he has written six more collections, several widely adopted literature and writing textbooks, and seventeen books for children, including two novels. He has taught at Michigan, North Carolina (Greensboro), California (Irvine), Wellesley, Tufts, and Leeds. Cited in "Bartlett's Familiar Quotations "and reprinted in some 200 anthologies, his verse has brought him a Guggenheim fellowship, a Lamont Award, a "Los Angeles Times" Book Prize, an award from the American Academy and Institute of Arts and Letters, an Aiken-Taylor prize, the Robert Frost Medal of the Poetry Society of America, and the Award for Poetry for Children from the National Council of Teachers of English. He now lives in Lexington, Massachusetts, where he and his wife Dorothy have collaborated on four books and five children. Dana Gioia is a poet, critic, and teacher. Born in Los Angeles of Italian and Mexican ancestry, he attended Stanford and Harvard before taking a detour into business. ("Not many poets have a Stanford M.B.A., thank goodness!") After years of writing and reading late in the evenings after work, he quit a vice presidency to write and teach. He has published three collections of poetry, Daily Horoscope (1986), The Gods of Winter (1991), and Interrogations at Noon (2001), which won the American Book Award; and three critical volumes, including Can Poetry Matter? (1992), an influential study of poetry's place in contemporary America. Gioia has taught at Johns Hopkins, Sarah Lawrence, Wesleyan (Connecticut), Mercer, and Colorado College. He is also the co-founder of the summer poetry conference at West Chester University in Pennsylvania. From 2003-2009 he served as Chairman of the National Endowment for the Arts. At the NEA he created the largest literary programs in federal history, including Shakespeare in American Communities and Poetry Out Loud, the national high school poetry recitation contest. He also led the campaign to restore active and engaged literary reading by creating The Big Read, which has helped reverse a quarter century of decline in U.S. reading. He currently divides his time between Washington, D.C. and Santa Rosa, California, living with his wife Mary, their two sons, and two uncontrollable cats.