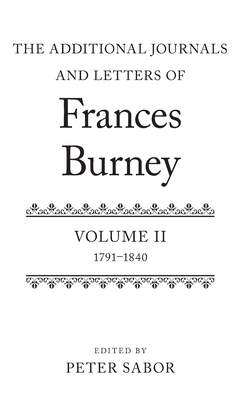 This is the second of two volumes of The Additional Journals and Letters of Frances Burney. Together the volumes present material not included in the existing series of Frances Burney's journals and letters. Volume I printed Burney's journals and letters from the beginning of 1784 until her
appointment at Court in July 1786, closing the gap between The Early Journals and Letters of Fanny Burney, which covers the period 1768-1783, and The Court Journals and Letters of Frances Burney, which covers the period 1786-1791.
This volume consists of all the letters, and journal and diary entries, written between 1791 and 1840 that were not included in the series of later journals, thus completing the modern editing of Burney's surviving journals and letters from 1768 until her death in 1840. Among Burney's many
correspondents in this volume, the most prominent is Hester Maria Thrale, known as Queeney, the eldest daughter of Hester Lynch Thrale and Henry Thrale. Sixty-four of the letters in this volume, dating from Burney's residence in France, 1802-1812, are written, in French, to sixteen different
correspondents; they are printed here with accompanying English translations. About twenty of the letters are to members of her family, including one that she wrote in London to her husband in Paris in May 1813 which throws much new light on her life in England and on her progress in completing her
final novel, The Wanderer. There are also letters to a variety of friends and acquaintances, some of long standing and others whom Burney first met only in her later years, including several to the Reverend Charles Forster, grandfather of E.M. Forster.

Peter Sabor, Canada Research Chair in Eighteenth-Century Studies and Professor of English, McGill University, Montreal Peter Sabor is Professor in the Department of English at McGill University, where he also holds the Canada Research Chair in Eighteenth-Century Studies and is Director of the Burney Centre. He is a past president of the Canadian Society for Eighteenth-Century Studies and a Fellow of the RoyalSociety of Canada. He has edited The Cambridge Companion to Frances Burney, and co-edited her Complete Plays and two of her novels, Cecilia and The Wanderer, as well as a selection of her Journals and Letters. He is the general editor of Burney's Court Journals and Letters (OUP) and the co-generaleditor of the Cambridge Edition of the Works and Correspondence of Samuel Richardson. His other publications include (with Thomas Keymer) Pamela in the Marketplace: Literary Controversy and Print Culture in Eighteenth-Century Britain and Ireland and the Juvenilia volume in the Cambridge Edition ofthe Works of Jane Austen.