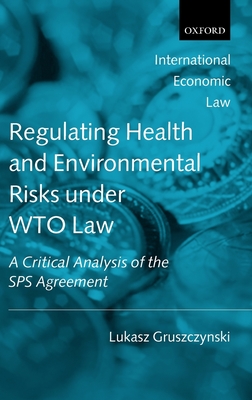 By Lukasz Gruszczynski
Email or call for price.
Usually Arrives in 2-10 Days

The last sixty years witnessed an unprecedented expansion of international trade. The system created by the General Agreement on Tariffs and Trade and later by the World Trade Organization (WTO) has proved to be an efficient instrument for the elimination of trade and tariff barriers. This process coincided with increased national regulatory controls, which were particularly visible in the area of risk regulation. Governments, responding to the demands of their domestic constituencies, have adopted a wide range of regulatory measures aimed at protecting the environment and human health. Although, for the most part, the new regulatory initiatives served legitimate objectives, it has also turned out that internal measures might become an attractive vehicle for protectionism, taking the place that was traditionally occupied by tariff barriers. Regulating Health and Environmental Risks under the WTO Law examines the WTO Agreement on the Application of Sanitary and Phytosanitary Measures (SPS Agreement). In which it is an attempt by the international community to limit possible abuses while assuring WTO Members of an extensive margin of regulatory discretion. The central problem that the book tackles is whether the system established by the SPS Agreement can address the existing and potential challenges of a new interdependent world. In answering this question, the author provides a comprehensive and critical examination of the substantive provisions of the Agreement and corresponding case law. In this context, the book particularly focuses on two issues: the consistency in the interpretation of the SPS Agreement and the appropriateness of its various requirements. This analysis leads the author to conclude that despite some interpretative failures of SPS case law, the system established by the SPS Agreement seems to provide an effective solution for the supervision of domestic SPS measures.

Lukasz Gruszczynski is a law graduate from the Jagiellonian University in Krakow (Poland) and the Central European University in Budapest (Hungary). From 2002 to 2004, he was a junior associate at the international law firm Lovells (Warsaw), where he specialized in commercial and corporate law. In 2004, Lukasz started a doctoral programme at the Law Department of the European University Institute in Florence (Italy). In 2008 he defended his Ph.D. thesis that on the WTO Agreement on the Application of Sanitary and Phytosanitary Measures. During his Ph.D. studies, Lukasz was also a visiting researcher at the University of Michigan Law School in Ann Arbor (USA). Currently, Lukasz is an Assistant Professor at the Institute of Legal Studies of the Polish Academy of Science. He is also the author of several well-received articles on international trade law.