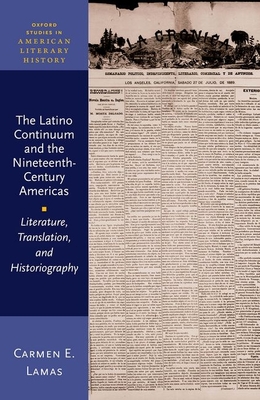 The Latino Continuum and the Nineteenth-Century Americas argues that the process of recovering Latina/o figures and writings in the nineteenth century does not merely create a bridge between the US and Latin American countries, peoples, and literatures, as they are currently understood.
Instead, it reveals their fundamentally interdependent natures, politically, socially, historically, and aesthetically, thereby recognizing the degree of mutual imbrication of their peoples and literatures of the period. Largely archived in Spanish, it addresses concerns palpably felt within (and
integral to) the US and beyond. English-language works also find a place on this continuum and have real implications for the political and cultural life of hispanophone and anglophone communities in the US. Moreover, the central role of Latina/o translations signal the global and the local nature
of the continuum. For the Latino Continuum embeds layered and complex political and literary contexts and overlooked histories, situated as it is at the crossroads of both hemispheric and translatlantic currents of exchange often effaced by the logic of borders-national, cultural, religious,
linguistic and temporal. To recover this continuum of Latinidad, which is neither confined to the US or Latin American nation states nor located primarily within them, is to recover forgotten histories of the hemisphere, and to find new ways of seeing the past as we have understood it. The figures
of the F�lix Varela, Miguel Teurbe Tol�n, Eusebio Guiteras, Jos� Mart� and Mart�n Mor�a Delgado serve as points of departures for this reconceptualization of the intersection between American, Latin American, Cuban, and Latinx studies.