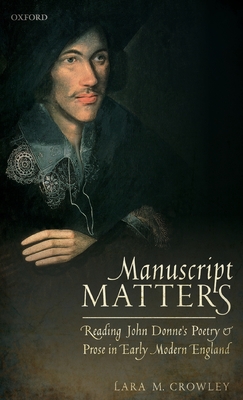 Manuscript Matters illuminates responses to some of John Donne's most elusive texts by his contemporary audiences. Since examples of seventeenth-century literary criticism prove somewhat rare and frequently ambiguous, this book emphasizes a critical framework rarely used for exhibiting early
readers' exegeses of literary texts: the complete manuscripts containing them. Many literary manuscripts that include poems by Donne and his contemporaries were compiled during their lifetimes, often by members of their circles. For this reason, and because various early modern poems and prose works
satirize topical events and prominent figures in highly coded language, attempting to understand early literary interpretations proves challenging but highly valuable. Compilers, scribes, owners, and other readersDSmen and women who shared in Donne's political, religious, and social contextsDSoffer
clues to their literary responses within a range of features related to the construction and subsequent use of the manuscripts. This study's findings call us to investigate more extensively and systematically how certain early manuscripts were constructed through analysis of such features as scripts, titles, sequence of contents, ascriptions, and variant diction. While such studies can throw light on many early modern texts,
exploring artefacts containing Donne's works proves particularly useful because more of his poetry circulated in manuscript than did that of any other early modern poet. Manuscript Matters engages Donne's satiric, lyric, and religious poetry, as well as his prose paradoxes and problems. Analysing
his texts within their manuscript contexts enables modern readers to interpret Donne's poetry and prose through an early modern lens.

Lara Crowley, Associate Professor of English, Northern Illinois University Lara Crowley has published articles on early modern literature and manuscript studies. She is co-editor of The Oxford Edition of the Letters of John Donne, the first scholarly edition of Donne's correspondence. She received her B.S. (1999) and M.A. (2002) from North Carolina State University and herPh.D. from the University of Maryland, College Park (2007). She was an Andrew W. Mellon fellow through the Institute of Historical Research, University of London, in 2006-7. After working at Texas Tech University (2008-12), she took a position at Northern Illinois University, where she is AssociateProfessor of English. She has participated in seminars on paleography and archival research methods at the Folger Shakespeare Library, and she has studied manuscripts at libraries and record offices throughout the United States and England.