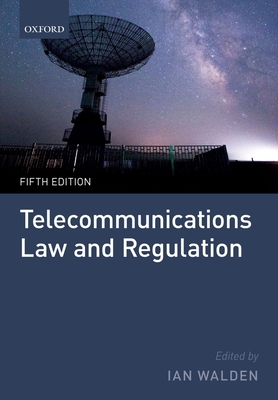 By Ian Walden
Email or call for price.
Special Order

Since the last edition of this book was published, numerous changes have occurred in the telecommunications sector, at a national, European, and international level. Telecommunications Law and Regulation takes these changes into account, including an examination of the adoption of Directive 2014/61/EU on the measures to reduce the cost of deploying electronic communication networks; Directive 2014/53/EU on radio equipment; Regulation 2015/2120 on 'open internet access' and roaming; and the implications of Brexit on the UK telecommunications sector. There is also coverage of substantial regulatory developments in US law since 2012, including the FCC's order on 'Protecting and Promoting the Open Internet' (March 2015). Written by leading experts, it is essential reading for legal practitioners and academics involved in the telecommunications industry.

Ian Walden, Professor, Centre for Commercial Law Studies, Queen Mary University of LondonIan Walden is Professor of Information and Communications Law in the Centre for Commercial Law Studies, Queen Mary, University of London. Ian has been involved in law reform projects for the World Bank, European Commission, Council of Europe, Commonwealth, UNCTAD, ITU, UNECE and the EBRD, as well as numerous individual states. Ian was awarded a Council of Europe Human Rights Fellowship (1987-88); a seconded national expert to the European Commission DG-Industry (1995-96); Board Member and Trustee of the Internet Watch Foundation (2004-09); on the Executive Board of the UK Council for Child Internet Safety (2010-12); the Press Complaints Commission (2009-14), a member of the RUSI Independent Surveillance Review (2014-15) and a member of the Code Adjudication Panel at PhonepayPlus (2016- ). Ian is a solicitor and Of Counsel to Baker & McKenzie.