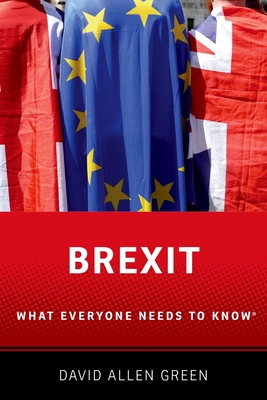 On 23 June 2016 voters in the United Kingdom voted unexpectedly in favour of departure from the European Union. The United Kingdom left the European Union on 31 January 2020. This book explains these two events, how led to the other, and what may now follow. Brexit was not inevitable. There may well have not been a referendum in 2016 or at all. The result of the referendum could have gone the other way. The government may have made the exit notification on another date. The European Union and the United Kingdom could have approached the negotiations and withdrawal agreement in other ways. The departure may have been without a deal as early as March 2019 or postponed indefinitely. There was even, at times, the prospect of a further referendum where the Brexit mandate could have perhaps been reversed. It all could have been very different. The way Brexit did happen was the result of a sequence of events and non-events, any of which could have gone differently. It also took place at a time of significant changes in media and social media, and also in domestic and international politics, all of which shaped the course and manner of the departure. Brexit may not have been inevitable but if Brexit had not happened between 2016 and 2020, it is possible the question of the United Kingdom's place in the European Union could have been forced in other ways. Brexit also happened against the background of longer-term trends in politics and constitutional arrangements in the UK. Support for membership among mainstream politicians had been wide for fifty years but that consensus turned out to be shallow. The structural changes brought by the Good Friday Agreement of 1998 confined the actions of politicians twenty years later. On Brexit sets out, in a sequence of interlinked essays, why and how Brexit turned out the way it did and not otherwise, and the text emphasises matters of law, policy and process as much as the course of political events. Brexit cannot be explained by structural and procedural matters but it cannot be fully explained just by politics either. On Brexit also sets out the political, media and constitutional contexts in which Brexit can be better understood. By understanding how Brexit has so far taken the form it has, one is in a better position for understanding what will happen next, as the United Kingdom and the European negotiate their longer-term relationship. This book was originally to be published as Brexit: what everyone needs to know

David Allen Green, a writer and lawyer, followed Brexit closely at each stage. David is a contributing editor of the Financial Times and a consultant solicitor at Preiskel & Co LLP in Temple, London.