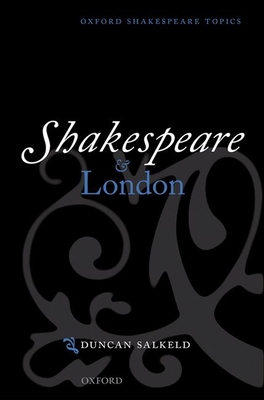 Stratford made the man, but London made the phenomenon that is Shakespeare. This volume takes an historical approach to Shakespeare's connections with London. It explores Stratford's various links with the capital, significant locations for Shakespeare's work, people with whom he associated,
his resistance to pressure from the City authorities, and the cultural diversity of early modern London. Among many aspects of his life in the City and its environs, it covers the playhouses in Shoreditch, his associations with Bishopsgate, his brother Edmund's residence on Bankside, and elements of
London life that went into the making of Falstaff. Being 'forest born', he was always an outsider and could never have been, or felt, accepted as a citizen. We find him repeatedly a sojourner in the City, on the move. His home and family lay in Stratford. Despite his success in the capital, we might
almost imagine him to have been a reluctant Londoner. Shakespeare and London draws on a range of documentary sources including City parish registers, county sessions records and the archives of London's Bridewell Hospital. It sets out details about those who inhabited Shakespeare's milieu, or played some part in shaping his writing and acting career.
This volume is Ideal reading for undergraduates, graduates, and specialists of Shakespeare studies.

Duncan Salkeld, Professor of Shakespeare and Renaissance Literature, University of Chichester Duncan Salkeld studied at the University of Wales and became a teacher before joining the West Sussex Institute of Higher Education. He has worked with the archives of the Bridewell and Bethlem Hospitals and has authored articles and chapters on topics as diverse as Machiavelli's comedies and thesharpness of Falstaff's nose. He is currently working on a study of the Shakespeare quartos.