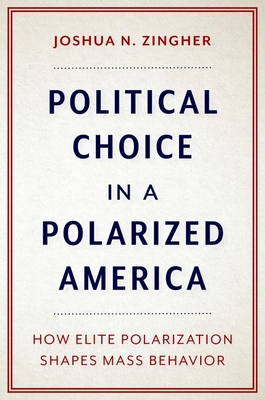 What motivates citizens to support one party over the other? Do they carefully weigh all of the relevant issues and assess which party or candidate best matches their own positions? Or do people look at politics as something more akin to a team sport--the specifics do not matter as long as you know what side your team is on? Answering these questions requires us to think about how much the average American knows about politics. Many scholars of public opinion believe that the majority of Americans only pay passing attention to politics. Thus the electorate's apparent lack of political competence presents a direct challenge to normative theories of democracy. How are citizens supposed to exert control over the government if they have no idea what is going on? In Political Choice in a Polarized America, Joshua N. Zingher argues that these fears are overblown. Not only do individuals have core beliefs about what the government should or should not do, but individuals have become more likely to support the party that best matches their policy attitudes by both identifying as a member of that party and voting for that party in elections. However, as Zingher demonstrates, voters' ability to match their attitudes to a party or candidate varies according to signals sent by elites and increases as parties become more polarized. This is true even among citizens with less political knowledge and efficacy. Voters now consistently cast ballots for the candidates who best match their own policy orientations and are increasingly likely to express hostility towards members of the other party due to growing elite polarization. Moreover, policy preferences tend to remain stable over time and both shape and are shaped by partisanship. Tackling decades of
mixed findings about the prevalence (or lack) of policy voting, Zingher argues that the average American is much more likely to vote for the party that best represents their views than they were in the past. American voters have adapted to a more polarized environment by becoming more polarized themselves.