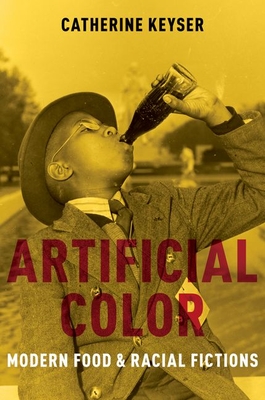 By Catherine Keyser
$27.45
Email or call for price.

In Artificial Color, Catherine Keyser examines the early twentieth century phenomenon, wherein US writers became fascinated with modern food--global geographies, nutritional theories, and technological innovations. African American literature of the 1920s and 1930s uses new food technologies
as imaginative models for resisting and recasting oppressive racial categories. In his masterwork Cane (1923), Jean Toomer follows sugar from the boiling-pots of the South to the speakeasies of the North. Through effervescent and colorful soda, he rejects the binary of black and white in favor of a
dream of artificial color and a new American race. In his serial science fiction, Black Empire (1938-39), George Schuyler associates hydroponics and raw foods with racial hybridity and utopian futures. The second half of the book focuses on white expatriate writers who experienced local food cultures as sensuous encounters with racial others. Ernest Hemingway and Gertrude Stein associate regional European races with the ideal of terroir and aspire to transplantation through their own
connoisseurship. In their novels set in the Mediterranean, F. Scott and Zelda Fitzgerald both dramatize the white body's susceptibility to intoxicating and stimulating substances like wine and coffee. For Scott Fitzgerald, the climatological and culinary corruption of the South produces the tragic
fall of white masculinity. For Zelda, by contrast, it exposes the destructiveness and fictitiousness of the white feminine purity ideal. During the Great Depression and the Second World War, African American writers Zora Neale Hurston and Dorothy West exposed the racism that shaped the global food
industry and the precarity of black labor. Their engagement with food, however, insisted upon pleasure as well as vulnerability, the potential of sensuous flesh and racial affiliation. In its embrace of invention and interconnection, Catherine Keyser contends, this modern fiction reveals that, far from being stable, whiteness may be the most obviously artificial color of them all.

Catherine Keyser is Professor of English at the University of South Carolina and the author of Playing Smart: New York Women Writers and Modern Magazine Culture (Rutgers University Press 2010).