The Dragons and the Snakes: How the Rest Learned to Fight the West (Paperback) 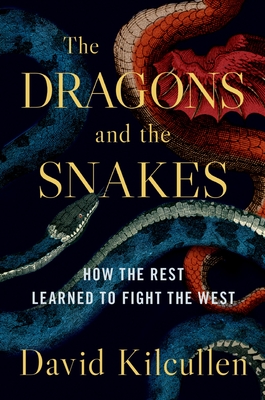 By David Kilcullen
Email or call for price

A counterintuitive examination into how, and what, opponents of the West have learned during the last quarter-century of conflict. Just two decades ago, observers spoke of the US as a hyperpower--a nation with more relative power than any empire in history. Yet as early as 1993, CIA director James Woolsey pointed out that although Western powers had slain a large dragon by defeating the Soviet Union, they now faced a
bewildering variety of poisonous snakes. In The Dragons and the Snakes, the eminent soldier-scholar David Kilcullen asks how, and what, opponents of the West have learned during the last quarter-century of conflict. Applying a combination of evolutionary theory and detailed field observation, he
explains what happened to the snakes--non-state threats including terrorists and guerrillas--and the dragons--state-based competitors such as Russia and China. He explores how enemies learn under conditions of conflict, and examines how Western dominance over a very particular, narrowly-defined
form of warfare since the Cold War has created a fitness landscape that forces adversaries to adapt in ways that present serious new challenges to America and its allies. Within the world's contemporary conflict zones, state and non-state threats have increasingly come to resemble each other, with
states adopting non-state techniques and non-state actors now able to access lethal weapon systems once only available to governments. A counterintuitive look at a vastly more complex conflict environment, this book both reshapes our understanding of the West's adversaries and shows how we can
respond given the increasing limits on US power.

David Kilcullen is a Professor in the School of Humanities and Social Sciences of the University of New South Wales, and a Professor of Practice in Global Security at Arizona State University. He heads the strategic research firm Cordillera Applications Group. A former soldier and diplomat, heserved as a counterinsurgency advisor during the wars in Iraq and Afghanistan. In recent years he has supported aid agencies, non-government organizations, and local communities in conflict and disaster-affected regions, and developed new ways to think about highly networked urban environments. Dr.Kilcullen was named one of the Foreign Policy Top 100 Global Thinkers in 2009 and is the author of the highly acclaimed The Accidental Guerrilla, Out of the Mountains, and Blood Year.