The Myth of the Cultural Jew: Culture and Law in Jewish Tradition (Hardcover) 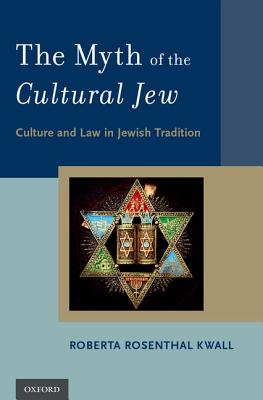 A myth exists that Jews can embrace the cultural components of Judaism without appreciating the legal aspects of the Jewish tradition. This myth suggests that law and culture are independent of one another. In reality, however, much of Jewish culture has a basis in Jewish law. Similarly, Jewish law produces Jewish culture. A cultural analysis paradigm provides a useful way of understanding the Jewish tradition as the product of both legal precepts and cultural elements. This paradigm sees law and culture as inextricably intertwined and historically specific. This perspective also emphasizes the human element of law's composition and the role of existing power dynamics in shaping Jewish law. In light of this inevitable intersection between culture and law, The Myth of the Cultural Jew: Culture and Law in Jewish Tradition argues that Jewish culture is shallow unless it is grounded in Jewish law. Roberta Rosenthal Kwall develops and applies a cultural analysis paradigm to the Jewish tradition that departs from the understanding of Jewish law solely as the embodiment of Divine command. Her paradigm explains why both law and culture must matter to those interested in forging meaningful Jewish identity and transmitting the tradition.

Roberta Rosenthal Kwall is the Raymond P. Niro Professor of Law at DePaul University College of Law. Prior to teaching at DePaul, she practiced law at Sidley & Austin in Chicago and served as a judicial clerk for Judge Leonard I. Garth, U.S. Court of Appeals for the 3rd Circuit. Kwall earned her law degree from the University of Pennsylvania and received her undergraduate degree from Brown University. Currently she is completing a Master's Degree in Jewish Studies. Kwall is an internationally renowned scholar and lecturer and has published articles on a wide variety of topics including Jewish law and culture, intellectual property, and property law. Her book, The Soul of Creativity: Forging a Moral Rights Law for the United States, is the seminal work in this area. She has received numerous awards for teaching and scholarship and in 2006, was designated as one of the 10 Best Law Professors in Illinois by Chicago Lawyer magazine.