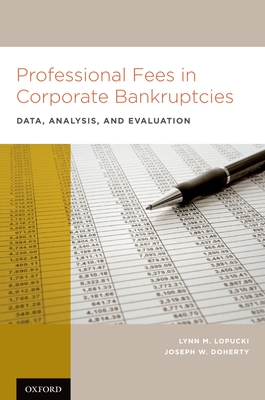 Bankrupt Enron paid more than a billion dollars in cash to bankruptcy lawyers, financial advisors, and other bankruptcy professionals. The managers of Enron, like those of most bankrupt companies, paid the professionals with other peoples' money - money that would otherwise have gone to creditors, employees, shareholders, or to saving the companies. To prevent excessive payments, the bankruptcy code and rules establish an elaborate system for public reporting and court approval of professional fees. Armed with the ability to choose among courts that want or need to attract the cases, the professionals have largely taken charge of the fee-control system and rendered it toothless. The professionals ignore ignore the rules and the courts do nothing about it. Objections to fees are rare, and the courts award almost 99% of the amounts applied for. Fees rose at the rate of 9.5% per year from 1998 through 2007. Effective methods for assessing and controlling fees do exist, but it is not in the interests of the courts or the professionals to employ them. Based on a study of thousands of documents from the court files in 102 of the largest cases, bankruptcy expert, Lynn M. LoPucki, and political scientist, Joseph W. Doherty, provide an unprecedented window on the worlds of bankruptcy professionals, professional fees, and their scientific study. Through that window, readers see both a disturbing picture of a legal system in crisis and a hopeful one with opportunities for desperately needed reform. Professional Fees in Corporate Bankruptcies is a scholarly work that employs statistical analysis, and documents its findings to scientific standards. But the authors have written for readers with technical backgrounds in neither bankruptcy nor statistics. This book will be of interest not only to scholars studying professional fees, but also to bankruptcy professionals, judges, policymakers, and anyone interested in the functioning of law-based systems.

Lynn M. LoPucki is the Security Pacific Bank Professor of Law at the UCLA School of Law. Each fall semester he is the Bruce W. Nichols Visiting Professor of Law at the Harvard Law School where he has been co-teaching the seminar on Empirical Analysis of Law with Professor Elizabeth Warren. Professor LoPucki has engaged in empirical research on large public company bankruptcies for more than twenty-five years. His Bankruptcy Research Database provides data for much, if not most, empirical work on the subject. His book, Courting Failure: How Competition for Big Cases Is Corrupting the Bankruptcy Courts (2005) shocked the bankruptcy world with empirical evidence of the devastating effects of forum shopping and court competition. Joseph W. Doherty is the Director of the Empirical Research Group (ERG) at the UCLA School of Law and the co-Director of the UCLA-RAND Center for Law and Public Policy. Professor Doherty teaches Empirical Legal Studies at UCLA Law. He is a prolific collaborator, having co-authored research on bankruptcy with Lynn LoPucki, on the living wage with Richard Sander, on negotiation strategy with Russell Korobkin, on international criminal law with M�ximo Langer and Richard Steinberg, on employment discrimination with Gary Blasi, and on administrative law with Jody Freeman. He has also published articles on voting behavior and campaign finance. He has a Ph.D. in political science from UCLA.