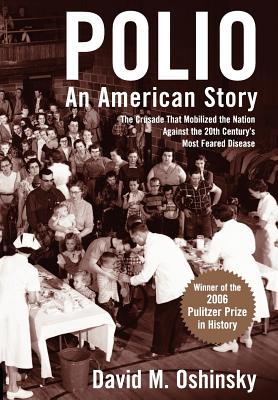 All who lived in the early 1950s remember the fear of polio and the elation felt when a successful vaccine was found. Now David Oshinsky tells the gripping story of the polio terror and of the intense effort to find a cure, from the March of Dimes to the discovery of the Salk and Sabin vaccines--and beyond. Here is a remarkable portrait of America in the early 1950s, using the widespread panic over polio to shed light on our national obsessions and fears. Drawing on newly available papers of Jonas Salk, Albert Sabin and other key players, Oshinsky paints a suspenseful portrait of the race for the cure, weaving a dramatic tale centered on the furious rivalry between Salk and Sabin. Indeed, the competition was marked by a deep-seated ill will among the researchers that remained with them until their deaths. The author also tells the story of Isabel Morgan, perhaps the most talented of all polio researchers, who might have beaten Salk to the prize if she had not retired to raise a family. As backdrop to this feverish research, Oshinsky offers an insightful look at the National Foundation for Infantile Paralysis, which was founded in the 1930s by FDR and Basil O'Connor. The National Foundation revolutionized fundraising and the perception of disease in America, using "poster children" and the famous March of Dimes to raise hundreds of millions of dollars from a vast army of contributors (instead of a few well-heeled benefactors), creating the largest research and rehabilitation network in the history of medicine. The polio experience also revolutionized the way in which the government licensed and tested new drugs before allowing them on the market, and the way in which the legal system dealt with manufacturers' liability for unsafe products. Finally, and perhaps most tellingly, Oshinsky reveals that polio was never the raging epidemic portrayed by the media, but in truth a relatively uncommon disease. But in baby-booming America--incre.

David M. Oshinsky is Professor of History at New York University and Director of the Division of Medical Humanities at the NYU School of Medicine. A leading historian of modern American politics and society, he is the author of A Conspiracy So Immense: The World of Joe McCarthy and "Worse Than Slavery": Parchman Farm and the Ordeal of Jim Crow Justice, both of which won major prizes and were New York Times Notable Books.