Common: The Development of Literary Culture in Sixteenth-Century England (Paperback) 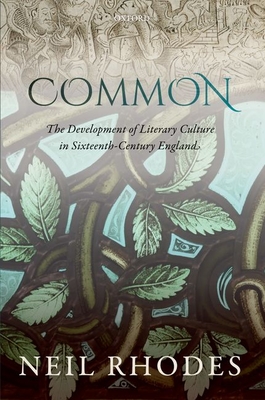 This volume explores the development of literary culture in sixteenth-century England as a whole and seeks to explain the relationship between the Reformation and the literary renaissance of the Elizabethan period. Its central theme is the 'common' in its double sense of something shared and
something base, and it argues that making common the work of God is at the heart of the English Reformation just as making common the literature of antiquity and of early modern Europe is at the heart of the English Renaissance. Its central question is 'why was the Renaissance in England so late?'
That question is addressed in terms of the relationship between Humanism and Protestantism and the tensions between democracy and the imagination which persist throughout the century. Part One establishes a social dimension for literary culture in the period by exploring the associations of 'commonwealth' and related terms. It addresses the role of Greek in the period before and during the Reformation in disturbing the old binary of elite Latin and common English. It also argues
that the Reformation principle of making common is coupled with a hostility towards fiction, which has the effect of closing down the humanist renaissance of the earlier decades. Part Two presents translation as the link between Reformation and Renaissance, and the final part discusses the
Elizabethan literary renaissance and deals in turn with poetry, short prose fiction, and the drama written for the common stage.

Neil Rhodes, Professor of English Literature and Cultural History, University of St Andrews Neil Rhodes was a Scholar of St Catherine's College, Oxford, where he won the Newdigate prize. His publications include English Renaissance Translation Theory (2013), Shakespeare and the Origins of English (2004) and, with Jonathan Sawday, The Renaissance Computer: Knowledge Technology in the FirstAge of Print (2000). His first book, Elizabethan Grotesque (1980), was reissued in 2015. He is co-General Editor with Andrew Hadfield of the MHRA Tudor and Stuart Translations and is a visiting professor at the University of Granada and Liverpool Hope University. He is Professor of EnglishLiterature and Cultural History at the University of St Andrews.