Dissent on the Margins: How Soviet Jehovah's Witnesses Defied Communism and Lived to Preach about It (Paperback) 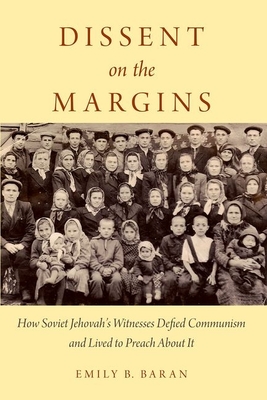 Emily B. Baran offers a gripping history of how a small, American-based religious community, the Jehovah's Witnesses, found its way into the Soviet Union after World War II, survived decades of brutal persecution, and emerged as one of the region's fastest growing religions after the Soviet
Union's collapse in 1991. In telling the story of this often misunderstood faith, Baran explores the shifting boundaries of religious dissent, non-conformity, and human rights in the Soviet Union and its successor states. Soviet Jehovah's Witnesses are a fascinating case study of dissent beyond urban, intellectual nonconformists. Witnesses, who were generally rural, poorly educated, and utterly marginalized from society, resisted state pressure to conform. They instead constructed alternative communities based on
adherence to religious principles established by the Witnesses' international center in Brooklyn, New York. The Soviet state considered Witnesses to be the most reactionary of all underground religious movements, and used extraordinary measures to try to eliminate this threat. Yet Witnesses
survived, while the Soviet system did not. After 1991, they faced continuing challenges to their right to practice their faith in post-Soviet states, as these states struggled to reconcile the proper limits on freedom of conscience with European norms and domestic concerns. Dissent on the Margins provides a new and important perspective on one of America's most understudied religious movements.

Emily B. Baran is Assistant Professor of History at Middle Tennessee State University. She specializes in the intersection of religion, modern state politics, and human rights in the postwar Soviet Union and its successor states. She received her PhD from the University of North Carolina at ChapelHill in 2011.