The Prince of the Marshes: And Other Occupational Hazards of a Year in Iraq (Hardcover) 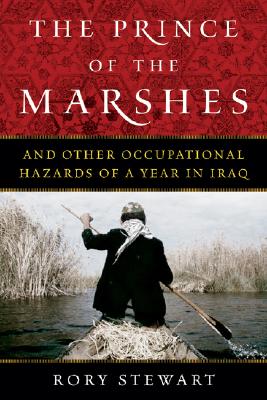 In August 2003, at the age of thirty, Rory Stewart took a taxi from Jordan to Baghdad. A Farsi-speaking British diplomat who had recently completed an epic walk from Turkey to Bangladesh, he was soon appointed deputy governor of Amarah and then Nasiriyah, provinces in the remote, impoverished marsh regions of southern Iraq. He spent the next eleven months negotiating hostage releases, holding elections, and splicing together some semblance of an infrastructure for a population of millions teetering on the brink of civil war.

The Prince of the Marshes tells the story of Stewart's year. As a participant he takes us inside the occupation and beyond the Green Zone, introducing us to a colorful cast of Iraqis and revealing the complexity and fragility of a society we struggle to understand. By turns funny and harrowing, moving and incisive, it amounts to a unique portrait of heroism and the tragedy that intervention inevitably courts in the modern age.

"A surreal and futile yearlong struggle, scrupulously recounted...Stewart is a fearless reporter and smart observer."

"Richly detailed, often harrowing...Stewart seems to be living one of the more extraordinary lives on record."

"Both shrewd and self-deprecating...Recalls an earlier generation of British travel writer."