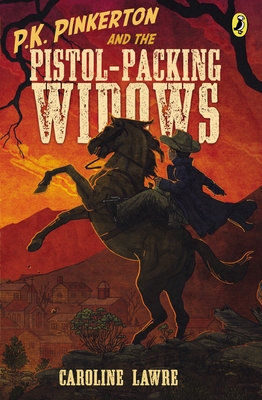 This is book number 3 in the P.K. Pinkerton series.

"If, as P.K.’s foster mother puts it, ‘a Detective is someone who uncovers the Truth & brings Justice’ then Lawrence…is being the kind of detective all good authors can be."--New York Times Book Review on P.K. Pinkerton and the Deadly Desperados

P.K. Pinkerton’s detective agency is thriving in Virginia City—until the evening P.K. is abruptly stuffed into a turnip sack and tossed into the back of a wagon! Surfacing in Chinatown, P.K. is forced into taking a job trailing the abductor’s fiancé in Carson City.

Danger lurks at every turn. P.K. must battle quicksand, escape the despicable former Deputy Marshall, Jack Williams, and save Poker Face Jace from certain death at the hands of the fatal “Black Widow,” who is courting P.K.’s friend and mentor.

Master-of-disguise P.K. Pinkerton has almost perfected the art of staying hidden in plain sight, but when the stakes become life or death, the only thing that can save the young detective is to give away the biggest secret of all.

Caroline Lawrence (www.caraolinelawrence.com) grew up in Bakersfield, California, and claims that some of her ancestors were pioneers, teamsters and newspapermen. Caroline moved to England to study classics at Cambridge. After a decade of immersing herself in Roman history to write the Roman Mysteries series, Caroline is now mining the rich vein of American history during the tumultuous 1860s. She currently lives in London by the river with her history-loving husband, who did the illustrations for this book. Follow her on Twitter @CarolineLawrenc