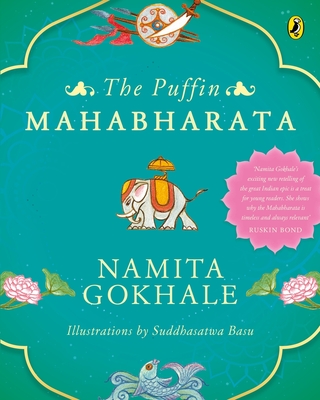 'A long, long time ago, in the ancient lands of India, known in those days as Bharatvarsha, a family quarrel grew into a bloody war. There had been wars before, and there have been wars since, but that mighty battle between warring cousins of the Kuru clan has become a part of the mythology and history of India. Told and retold a million times, the story of the Mahabharata is about defeat as much as victory, about humility as much as courage. It is the greatest story ever told.'

Like a modern-day suta or storyteller, Namita Gokhale brings alive India's richest literary treasure with disarming ease and simplicity. She retells this timeless tale of mortals and immortals and stories within stories, of valour, deceit, glory, and despair, for today's young reader in a clear, contemporary style.

A brilliant series of evocative and thoughtful illustrations by painter and animator Suddhasattwa Basu brings the epic to life in a vibrant visual feast.

Matchless in its content and presentation, The Puffin Mahabharata is a book that will be cherished by readers of all ages.

Namita Gokhale is an award-winning writer, publisher and festival director. She has authored twenty books, including eleven works of fiction. Her other works for young readers include Lost in Time: Ghatotkacha and the Game of Illusions also published by Puffin. Gokhale is a founder and co-director of the Jaipur Literature Festival and deeply engaged with literary initiatives around the world.

Suddhasattwa Basu is a painter, illustrator and animation film-maker, who studied at the College of Art, Calcutta. He is one of India's foremost illustrators of children's books. Among the books he has illustrated and designed are Khushwant Singh's Nature Watch, Ruskin Bond's To Live in Magic and V. Sulaiman's The Homecoming. He has also authored and illustrated a children's book The Song of a Scarecrow (Katha), for which he received the Chitrakatha Award 2003 for best children's book illustrations. He lives in Delhi and works under the banner of his company Raikhik Films.