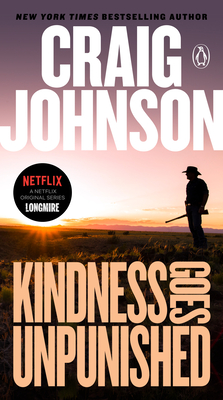 By Craig Johnson
$9.99
Email or call for price.

This is book number 3 in the A Longmire Mystery series.

Walt Longmire has been Sheriff of Absaroka County, Wyoming, for almost a quarter of a century, but when he joins his good friend Henry Standing Bear on a trip to the City of Brotherly Love to see his daughter, Cady, he's in for a shock. Walt hasn't even put his boots up when Cady is viciously attacked and left near death on the steps of the Franklin Institute. He soon discovers that she has unwittingly become involved in a deadly political cover-up. Backed by Henry, Dog, Deputy Victoria Moretti, and the entire Moretti posse of Philadelphia police officers, Walt unpacks his saddlebag of tricks to mete out some Western-style justice.

Craig Johnson is the New York Times bestselling author of the Longmire mysteries, the basis for the hit Netflix original series Longmire. He is the recipient of the Western Writers of America Spur Award for fiction, the Mountains and Plains Booksellers Award for fiction, the Nouvel Observateur Prix du Roman Noir, and the Prix SNCF du Polar. His novella Spirit of Steamboat was the first One Book Wyoming selection. He lives in Ucross, Wyoming, population twenty-five.

"With strong human emotions of love, greed, and revenge . . . multifaceted and rich with depth and history."
-The Denver Post

"Craig Johnson is flat out one of the best storytellers around."
-Margaret Coel, author of The Girl with the Braided Hair

"Johnson's pacing is tight and his dialogue snaps."
-Entertainment Weekly