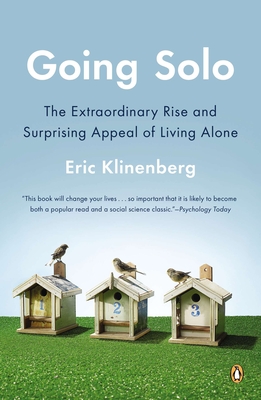 With eye-opening statistics, original data, and vivid portraits of people who live alone, renowned sociologist Eric Klinenberg upends conventional wisdom to deliver the definitive take on how the rise of going solo is transforming the American experience.

Klinenberg shows that most single dwellers—whether in their twenties or eighties—are deeply engaged in social and civic life. There's even evidence that people who live alone enjoy better mental health and have more environmentally sustainable lifestyles. Drawing on more than three hundred in-depth interviews, Klinenberg presents a revelatory examination of the most significant demographic shift since the baby boom and offers surprising insights on the benefits of this epochal change.

Eric Klinenberg is a professor of sociology at New York University and the editor of the journal Public Culture. His first book, Heat Wave, won several prizes and was declared a "Favorite Book" by the Chicago Tribune. He lives in New York City.

“A book so important that it is likely to become both a popular read and a social science classic. . . . This book really will change the lives of people who live solo, and everyone else . . . thorough, balanced, and persuasive.” — Psychology Today

“Fascinating and admirably temperate . . . [Going Solo] does a good job of explaining the social forces behind the trend and exploring the psychology of those who participate in it.” — Daniel Akst, The Wall Street Journal


“Klinenberg convincingly argues that the convergence of mass urbanization, communications technology, and liberalized attitudes has driven this trend.” — Slate

“Going Solo examines a dramatic demographic trend: the startling increase in adults living alone. Along the way, the book navigates some rough and complicated emotional terrain, finding its way straight to questions of the heart, to the universal yearning for happiness and purpose. In the end, despite its title, Going Solo is really about living better together—for all of us, single or not.” — The Washington Post

“Thought-provoking . . . Mr. Klinenberg argues that singletons comprise a kind of shadow population that’s misunderstood by policymakers and our culture writ large. Going Solo is an attempt to fill in the blanks— to explain the causes and consequences of living alone, and to describe what it looks in everyday life. . . . Klinenberg renders [these] stories vividly but also with nuance.” — The Christian Science Monitor

"Today, as Eric Klinenberg reminds us in his book, Going Solo, more than 50 percent of adults are single . . . [he] nicely shoes that people who live alone are more likely to visit friends and join social groups. They are more likely to congregate in and create active, dynamic cities." — David Brooks, The New York Times