Carthage Must Be Destroyed: The Rise and Fall of an Ancient Civilization (Paperback) 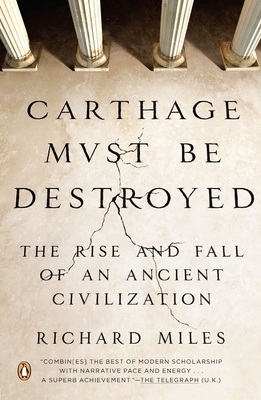 The first full-scale history of Hannibal's Carthage in decades and "a convincing and enthralling narrative." (The Economist )

Drawing on a wealth of new research, archaeologist, historian, and master storyteller Richard Miles resurrects the civilization that ancient Rome struggled so mightily to expunge. This monumental work charts the entirety of Carthage's history, from its origins among the Phoenician settlements of Lebanon to its apotheosis as a Mediterranean empire whose epic land-and-sea clash with Rome made a legend of Hannibal and shaped the course of Western history. Carthage Must Be Destroyed reintroduces readers to the ancient glory of a lost people and their generations-long struggle against an implacable enemy.

Richard Miles teaches ancient history at the University of Sydney and is a Fellow-Commoner of Trinity Hall, University of Cambridge. He has written widely on Punic, Roman, and Vandal North Africa and has directed archaeological excavations in Carthage and Rome. He divides his time between Sydney, Australia, and Cambridge, England.