The Poisoner's Handbook: Murder and the Birth of Forensic Medicine in Jazz Age New York (Paperback) 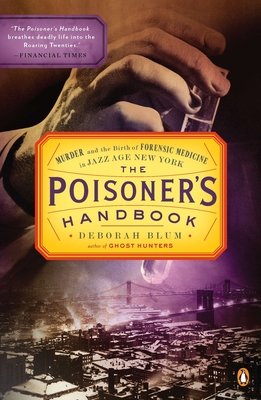 “Reads like science fiction, complete with suspense, mystery and foolhardy guys in lab coats tipping test tubes of mysterious chemicals into their own mouths.” —NPR: What We're Reading

A fascinating Jazz Age tale of chemistry and detection, poison and murder, The Poisoner's Handbook is a page-turning account of a forgotten era. In early twentieth-century New York, poisons offered an easy path to the perfect crime. Science had no place in the Tammany Hall-controlled coroner's office, and corruption ran rampant. However, with the appointment of chief medical examiner Charles Norris in 1918, the poison game changed forever. Together with toxicologist Alexander Gettler, the duo set the justice system on fire with their trailblazing scientific detective work, triumphing over seemingly unbeatable odds to become the pioneers of forensic chemistry and the gatekeepers of justice.

In 2014, PBS's AMERICAN EXPERIENCE released a film based on The Poisoner's Handbook.

Deborah Blum is director of the Knight Science Journalism Program at MIT, and editor of Undark magazine, (undark.org). In 1992, she won the Pulitzer Prize for a series on primate research, which she turned into a book, The Monkey Wars. Her other books include The Poisoner's Handbook, Ghost Hunters, Love at Goon Park, and Sex on the Brain. She has written for publications including The New York Times, Wired, Time, Discover, Mother Jones, The Guardian and The Boston Globe. Blum is a past president of the National Association of Science Writers, a fellow of the American Association for the Advancement of Science, and a lifetime associate of the National Academy of Sciences.

“The Poisoner’s Handbook is an inventive history that, like arsenic, mixed into blackberry pie, goes down with ease.” —The New York Times Book Review

“Deborah Blum has not lost the skills of good storytelling she honed as a Pulitzer Prize–winning journalist.” —Chicago Sun-Times

“Reads like science fiction, complete with suspense, mystery and foolhardy guys in lab coats tipping test tubes of mysterious chemicals into their own mouths.” —NPR: What We're Reading

“Fans of those TV forensic shows or of novels by Patricia Cornwell, Kathy Reichs or Jefferson Bass will find plenty to satisfy their appetites here.” —The Washington Post

“The Poisoner's Handbook opens one riveting murder case after another in this chronicle of Jazz Age chemical crimes where the real-life twists and turns are as startling as anything in fiction. Deborah Blum turns us all into forensic detectives by the end of this expertly written, dramatic page-turner that will transform the way you think about the power of science to threaten and save our lives.” —Matthew Pearl, author of The Technologists and The Dante Club