Before the Dawn: Recovering the Lost History of Our Ancestors (Paperback) 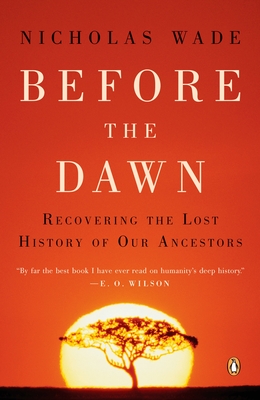 “By far the best book I have ever read on humanity’s deep history.”  —E. O. Wilson, biologist and author of The Ants and On Human Nature

Nicholas Wade’s articles are a major reason why the science section has become the most popular, nationwide, in the New York Times. In his groundbreaking Before the Dawn, Wade reveals humanity’s origins as never before—a journey made possible only recently by genetic science, whose incredible findings have answered such questions as: What was the first human language like? How large were the first societies, and how warlike were they? When did our ancestors first leave Africa, and by what route did they leave? By eloquently solving these and numerous other mysteries, Wade offers nothing less than a uniquely complete retelling of a story that began 500 centuries ago.

Nicholas Wade received a BA in natural sciences from King’s College, Cambridge. He was the deputy editor of Nature magazine in London and then became that journal’s Washington correspondent. He joined Science magazine in Washington as a reporter and later moved to The New York Times, where he has been an editorial writer, concentrating on issues of defense, space, science, medicine, technology, genetics, molecular biology, the environment, and public policy, a science reporter, and a science editor.

“Impeccable, fearless, responsible and absorbing . . . Bound to be the gold standard in the field for a very long time.” —Lionel Tiger, Rutgers University

“By far the best book I have ever read on humanity’s deep history.”  —E. O. Wilson, biologist and author of The Ants and On Human Nature