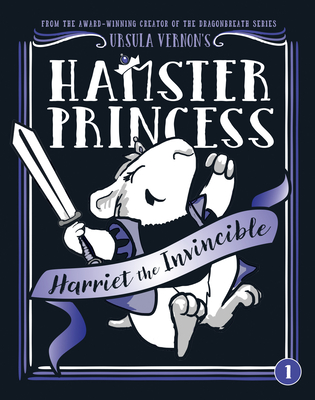 This is book number 1 in the Hamster Princess series.

Sleeping Beauty gets a feisty, furry twist in this hilarious new comic series from the creator of Dragonbreath

Harriet Hamsterbone is not your typical princess. She may be quite stunning in the rodent realm (you'll have to trust her on this one), but she is not so great at trailing around the palace looking ethereal or sighing a lot. She finds the royal life rather . . . dull. One day, though, Harriet's parents tell her of the curse that a rat placed on her at birth, dooming her to prick her finger on a hamster wheel when she's twelve and fall into a deep sleep. For Harriet, this is most wonderful news: It means she's invincible until she's twelve! After all, no good curse goes to waste. And so begins a grand life of adventure with her trusty riding quail, Mumfrey...until her twelfth birthday arrives and the curse manifests in a most unexpected way.

Perfect for fans of Babymouse and Chris Colfer's Land of Stories, this laugh-out-loud new comic hybrid series will turn everything you thought you knew about princesses on its head.

Ursula Vernon is a full-time author and illustrator whose work has won a Hugo award and been nominated for an Eisner. She loves birding, gardening, and spunky heroines, and thinks she would make a terrible princess. Ursula lives with her husband in Pittsboro, North Carolina.

"Middle-graders with a taste for absurdity and snark will find plenty of both here...Fans of Holm’s Babymouse (Babymouse: Queen of the World, BCCB 12/05) series or Vernon’s Dragonbreath (BCCB 9/09) series will definitely want to tag along on Harriet’s future adventures." —BCCB