P.K. Pinkerton and the Case of the Deadly Desperados (Paperback) 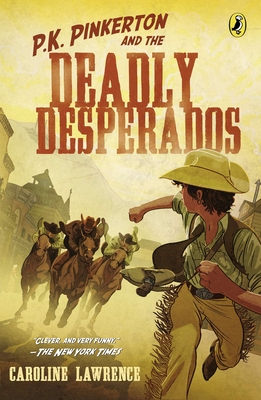 By Caroline Lawrence
$7.99
Email or call for price.

This is book number 1 in the P.K. Pinkerton series.

“P.K. Pinkerton is on the run from murdering thieves who want his deed to a silver mine. Scrambling through disguises, taverns, and dark alleys in a Wild West town, Pinky's biggest disadvantage is not being able to distinguish people's emotions, which makes it very hard to know who is lying and cheating and who, if anyone, is telling the truth. This is high-speed fun, with a sympathetic hero.”
— Ellen Davis, Dragonwings Bookstore, Waupaca, WI

The year is 1862, and twelve-year-old P.K. “Pinky” Pinkerton is on the run from Whittlin’ Walt and his gang of ruthless desperados. P.K. is determined to hold on to Ma’s last priceless possession: the deed to a large amount of land and silver mines in the Nevada Mountains. Problem is, that’s exactly what Whittlin’ Walt is after, and he’ll do just about anything to get his hands on it. P.K. will have to be both clever and cunning to evade the band of outlaws. But time is running out, and no one can run forever. After all, this is the Wild West, and there’s hardly a safe place to hide.

Caroline Lawrence grew up in Bakersfield, California, and claims that some of her ancestors were pioneers, teamsters and newspapermen. Caroline moved to England to study classics at Cambridge. After a decade of immersing herself in Roman history to write the Roman Mysteries series, Caroline is now mining the rich vein of American history during the tumultuous 1860s. She currently lives in London by the river with her history-loving husband, Richard, who did the illustrations for this book.

“I’m sure my action-loving 9-year-old, as well as my autistic 12-year-old, will love this buoyant story as it hurtles to a thrilling conclusion while being both moving and morally unsentimental. If, as P.K.’s foster mother puts it, ‘a Detective is someone who uncovers the Truth & brings Justice’ then Lawrence…is being the kind of detective all good authors can be."--New York Times Book Review

"A winning blend of Wild West and classic detective lore, this first book in the Western Mysteries series is a fast-paced, engrossing read, from beginning to end."--Booklist, starred review

“ …this agile story should keep readers’ attention from first page to last.”--Publishers Weekly