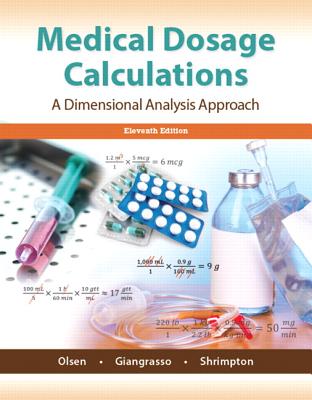 June Looby Olsen began her nursing career in Burlington, Vermont, at Bishop De Goesbriand Memorial Hospital, where she graduated from its nursing program. She obtained her BS and MS degrees in nursing from St. John's University, New York. She was a staff nurse, as well as a nurse supervisor, and became head nurse at the Veterans Administration Hospital in Brooklyn, New York. Her teaching career began at Staten Island Community College, and she retired as full professor emeritus from the College of Staten Island of the City University of New York. In addition to this textbook, Professor Olsen has written Fundamentals of Nursing Review and Dosage Calculation, both published by Springhouse. She was a recipient of the Mu Epsilon Leadership in Nursing award. Anthony Giangrasso was born and raised in Maspeth, New York. He attended Rice High School on a scholarship and in his senior year was named in an annual citywide contest by the New York Journal-American newspaper as New York City's most outstanding high school scholar-athlete. He was also awarded a full-tuition scholarship to Iona College, from which he obtained a BA in mathematics, magna cum laude, with a ranking of sixth in his graduating class. Anthony began his teaching career as a fifth-grade teacher in Manhattan, as a member of the Christian Brothers of Ireland, and taught high school mathematics and physics in Harlem and Newark, New Jersey. He holds an MS and PhD from New York University and has taught at all levels from elementary school through graduate school. He is currently teaching at Adelphi University and LaGuardia Community College, where he was chairman of the mathematics department. He has authored nine college textbooks through twenty-five editions. Anthony's community service has included membership on the boards of directors of the Polish-American Museum Foundation, Catholic Adoptive Parents Association, and Family Focus Adoptive Services. He was the president of the Italian-American Faculty Association of the City University of New York and the founding chairman of the board of the Italian-American Legal Defense and Higher Education Fund, Inc. He and his wife, Susan, are proud parents of three children-Anthony, Michael, and Jennifer-and grandparents of Calvin and Jackson. He enjoys tennis and twice has been ranked #1 for his age group in the Eastern Section by the United States Tennis Association. Dolores M. Shrimpton is Professor emerita of Nursing at Kingsborough Community College (CUNY), where she was Chairperson of the department for thirteen years. She received a diploma in nursing from Kings Country Hospital Center School of Nursing, a BS from C.W. Post College, an MA in nursing administration from New York University, and a post-Master's certificate in nursing education from Adelphi University. She is a member of the Upsilon and Mu Upilson Chapters of Sigma Theta Tau. She has taught a wide variety of courses in practical nursing, diploma, and associate degree nursing programs. She has authored three college nursing books through seven editions. Dolores has held many leadership positions in nursing, including Board Member, Vice-President, and President of the NYS Associate Degree Nursing Council. She was the Co-Chair of the CUNY Nursing Discipline Council, and Member of the Board of Directors and Co-President of the Brooklyn Nursing Partnership. She has served on a number of Advisory Boards of LPN, associate degree, and baccalaureate degree nursing programs. She is a recipient of the Presidential Award in Nursing Leadership from the Nurses Association of Long Island (NACLI) as well as of the Mu Upsilon award for Excellence in Nursing Education and Excellence in Nursing Leadership. The Brooklyn Nursing Partnership has also recognized her for her commitment to nursing. Dolores lives in Brooklyn, New York, and enjoys cooking and spending time with her grandchildren, Brooke Elizabeth, Paige Dolores, Jack Paul, and their parents, Kim and Shawn. She also enjoys traveling and spending time with friends and family in Harwich Port, Cape Cod, Massachusetts.