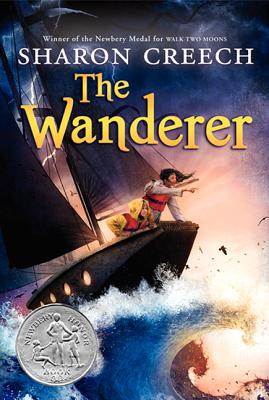 “A beautifully written and imaginatively constructed novel that speaks to the power of survival and the delicacy of grief.” —School Library Journal (starred review)

This acclaimed bestselling Newbery Honor Book from multi-award-winning author Sharon Creech is a classic and moving story of adventure, self-discovery, and one girl's independence.

Thirteen-year-old Sophie hears the sea calling, promising adventure and a chance for discovery as she sets sail for England with her three uncles and two cousins. Sophie’s cousin Cody isn’t so sure he has the strength to prove himself to the crew and to his father.

Through Sophie’s and Cody’s travel logs, we hear stories of the past and the daily challenges of surviving at sea as The Wanderer sails toward its destination—and its passengers search for their places in the world.

“Sophie is a quietly luminous heroine, and readers will rejoice in her voyage.” —BCCB (starred review)

Sharon Creech has written twenty-one books for young people and is published in over twenty languages. Her books have received awards in both the U.S. and abroad, including the Newbery Medal for Walk Two Moons, the Newbery Honor for The Wanderer, and Great Britain’s Carnegie Medal for Ruby Holler.

Before beginning her writing career, Sharon Creech taught English for fifteen years in England and Switzerland. She and her husband now live in Maine, “lured there by our grandchildren,” Creech says.

David Diaz has illustrated numerous award-winning books for children, including smoky night by Eve Bunting, for which he was awarded the Caldecott Medal; The Wanderer by Sharon Creech, which received a Newbery Honor; and Me, Frida by Amy Novesky, a Pura Belpré Honor Award winner. Mr. Diaz lives in Southern California.

“Sophie is a quietly luminous heroine, and readers will rejoice in her voyage.”
— The Bulletin of the Center for Children’s Books (starred review)

“A beautifully written and imaginatively constructed novel that speaks to the power of survival and the delicacy of grief.”
— School Library Journal (starred review)