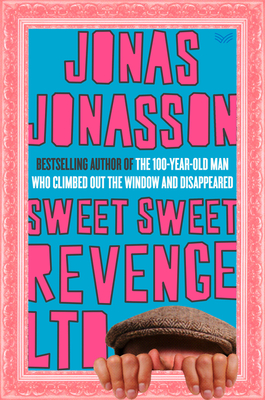 The beloved author of The Hundred-Year-Old Man Who Climbed Out of the Window and Disappeared returns with an enchanting adventure that skewers the greed and hypocrisy that dominates our time and holds lessons about what’s truly important in life.

As Agneta and Kevin seek revenge against the gallery owner who has wronged them, this madcap, funny and philosophical novel takes off on a madcap journey that spans five continents and whirls around a colorful cast of characters, including a goat called Molly and the Pope.

As he’s done in his previous novels, Jonas Jonasson acts as a travel guide through time, drops in a few lessons on colonialism and art history, and pokes fun at capitalism and the artworld, with plenty of laughs along the way.

Translated from the Swedish by Rachel Willson-Broyles

JONAS JONASSON worked as a journalist for the Expressen newspaper for many years. He became a media consultant and later set up a company producing sports and events for Swedish television. He then sold the company and moved abroad to work on his first novel. Today Jonasson is a global phenomenon. His five novels—The 100-Year-Old Man Who Climbed Out the Window and Disappeared, The Girl Who Saved the King of Sweden, Hitman Anders and the Meaning of It All, The Accidental Further Adventures of the Hundred-Year-Old Man and The Hundred-Year-Old Man Who Skipped Out on the Bill and Disappeared—have sold sixteen million copies in forty-six countries. Jonas Jonasson lives on the Swedish island of Gotland in the Baltic Sea.

"In the first chapters of Sweet, Sweet Revenge Ltd there's enough plot for several novels... Jonas Jonasson, best known for The Hundred-Year-Old Man Who Climbed Out the Window and Disappeared, is a wildly inventive writer, often funny, who stuffs his bonkers but entertaining story with art, politics and romance, and a tongue-in-cheek meditation on the philosophy of getting even. Great fun."
— The Times (London)

"Jonas Jonasson creates hilarity out of brilliantly absurd plots, whether it is a 100-year-old man escaping through an old folk' home window, or a South African peasant girl who saves the King of Sweden. His latest unlikely hero is Kevin who is abandoned by his callous father on the Kenyan savannah in the expectation he will be eaten by lions...Add a crooked art dealer, a lazy Swedish policeman, an ophthalmologist whose wife ditched him for a urologist, and we are set for delicious Jonasson mayhem."
— Daily Express (London)