They Never Let a Crisis Go to Waste: The Truth About Disaster Liberalism (Hardcover) 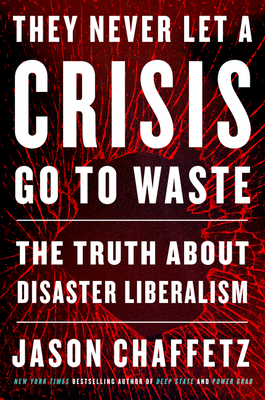 Two-time New York Times bestselling author Jason Chaffetz is back to blow the lid off the Democrats’ attempts to spend unparalleled trillions and rewrite our election laws while never letting us get back to normal.

Why did the left think they could solve the pandemic with burning cities, closed beaches, blue state budget bailouts, and mail-in ballots nobody asked for?

The coronavirus has been a disaster for America, but it’s been an unprecedented opportunity for the left. In They Never Let a Crisis Goes to Waste, Jason Chaffetz delves into progressive efforts to leverage crises to force their priorities into law. Whether the crisis is legitimate, fabricated, or exaggerated, the solution is always the same: more government, less individual freedom, higher spending, higher taxes.

He explores how disaster liberalism subjugates individual freedoms to political expediency in times of crisis, and how Republicans need to be ready for next time.  Because when we allow government power to become unlimited in a crisis, the crises will become unlimited.

Across the board, Democrat leaders exploited the pandemic to achieve their agenda, invoking disaster liberalism to justify unpopular and unconstitutional power grabs. Virginia Governor Ralph Northam signed a gun control bill on April 10—three weeks into pandemic—because he wouldn’t have to put up with tens of thousands of protestors. Wisconsin Governor Tony Evers announced he was making it a criminal offense to attend church or go to work, only to see his overreach struck down by the state supreme court. Nancy Pelosi rammed through a $3 trillion liberal wish list filled with proposals unrelated to COVID-19, that immediately died in the Senate.

If not for the courts and local media, many of the Democrats’ schemes would have successfully been implemented. As it was, many were—and many of the most egregious violations of Americans’ rights were celebrated across the left.

In They Never Let a Crisis Go to Waste, Chaffetz uncovers Democrats’ game plan and calls upon all Americans to protect ourselves against future incursions. If we don’t pay attention, the left will use every crisis to implement its radical plan, steadily eroding the freedoms we all hold dear. Only the American people have the power to stop the left’s next power grab, as Chaffetz shows in this powerful, thoroughly-researched call to action.

Jason Chaffetz is an American politician and Fox News contributor. He was elected as a U.S. Representative from Utah in 2008 after spending 16 years in the local business community. When he left Congress in 2017, he was the chairman of the United States House Committee on Oversight and Government Reform.

“Jason Chaffetz captures the reality of disaster liberalism in this fascinating new book. It’s true, Democrats never let a crisis go to waste. Chaffetz illuminates the tactics, shares the stories, provides unique insight, and gives you the perspective so you can recognize what’s happening in real time. Once you see what they do, and how they do it, you will never look at Washington, DC, the same.”
— Sean Hannity

“Jason’s book makes clear that the Left has two sets of rules: one for themselves, and one for everybody else. If you don’t buy their vision of an all-encompassing government, they deem you morally insufficient. That’s reason alone to deny them the power they seek.”
— Ben Shapiro

“Nancy Pelosi and others in Washington leveraged Coronavirus funding to further their political objectives and advance their interests. This sordid tale of corruption gets the attention it deserves in Chaffetz’s important book. I highly recommend it.”
— Peter Schweizer

“The hypocrisy and misdirection are stunning, even by Washington, DC, standards. While the country and medical professionals were fighting the realities of a potentially deadly virus, many policymakers were using the crisis as an opportunity to further their political agendas. Meanwhile, as Americans everywhere were suffering from the fallout of the pandemic, others were delaying help as they worked to redefine the term ‘public health crisis’ to include progressive agendas from school reform to ensuring corporate diversity. Jason Chaffetz shares the stories and provides true insights like you’ve never seen before.”
— Nicole Saphier, MD