Cleopatra: The Queen Who Challenged Rome and Conquered Eternity (Hardcover) 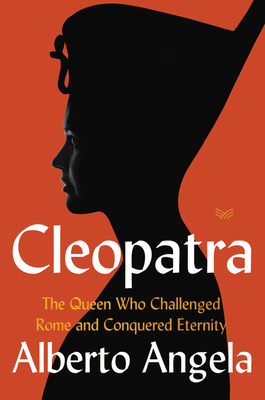 “The political machinations, betrayal, and battles may appeal to those fans of George R. R. Martin's A Song of Ice and Fire series interested in a real-world game of thrones.” -- Booklist

One of Italy’s most revered cultural figures reconstructs the extraordinary life of the legendary Cleopatra at the height of her power in this epic story of passion, intrigue, betrayal, and war.

Our world today would not be the same without Cleopatra. While she is one of the most famous figures in history, the legendary Egyptian queen remains, in many ways, an enigma. In this mesmerizing history, Alberto Angela offers a fresh and dynamic portrait of this extraordinary ruler, revealing a strikingly modern woman born in an ancient era and skilled in the art of diplomacy and war, who would conquer the heart of a general—Marc Antony—and Rome itself.

Cleopatra focuses on a twenty-year period that marked a sweeping change in Roman history, beginning with the assassination of Julius Caesar that led to the end of the Republic, and ending with the suicides of Antony and Cleopatra and the birth of the Augustan Empire. Angela brings the people, stories, customs, and traditions of this fascinating period alive as he transports us to the chaotic streets of the capital of the ancient world, the exotic port of Alexandria in Egypt, and to the bloody battlefields where an empire was won and lost.

Meticulously researched and rich with vivid detail, this sweeping history, reminiscent of the works of Simon Schama, Mary Beard’s SPQR, and Tom Holland’s Rubicon, recreates this remarkable era and the woman at its turbulent center.

Translated from the Italian by Katherine Gregor

“[Cleopatra] combines scholarship with novelistic detail and character depth…[Alberto Angela] effectively draws on previous scholarship, wading through legend and myth to get at the truth of what actually occurred… a character-rich historical biography.” -- Kirkus

Alberto Angela is a global ambassador of Italian art, history, and culture. Born in Paris in 1962, he is a paleontologist, naturalist, and journalist, as well as an established author and television host of programs such as Meraviglie, which is watched by more than six million viewers per episode.

“[Cleopatra] combines scholarship with novelistic detail and character depth . . . Alberto Angela effectively draws on previous scholarship, wading through legend and myth to get at the truth of what actually occurred . . . a character-rich historical biography.”
— Kirkus Reviews

“The political machinations, betrayal, and battles may appeal to those fans of George R. R. Martin's A Song of Ice and Fire series interested in a real-world game of thrones.”
— Booklist

“Maybe we think we know everything about this charming woman, yet Alberto Angela, with his thirst for art and culture, will tell us things that will perhaps surprise us and surely remain in our minds and hearts.”
— Roberto Baldini, Sololibri

“Cleopatra is more than a book; it is like being immersed in a documentary expertly narrated by the one Italian who can do it best: Alberto Angela. […] Written well, in a precise and engaging way, it reads lightly despite the topics covered.”
— Silvia Capelletto, Leggere A Colori

“Its fidelity to historical sources is complimented by its imaginative, light-on-its-feet narrative style.”

“Cleopatra dismantles falsehoods and stereotypes to reconstruct a more authentic and reliable portrait of its central figure.”

“A compelling and convincing fresco, full of action and emotion.”
— La Repubblica