The Heap: A Novel (Paperback) 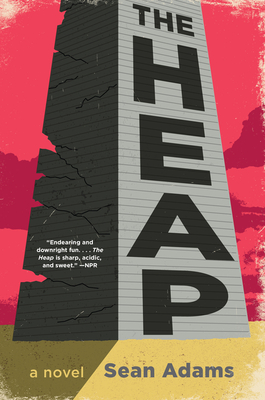 “As intellectually playful as the best of Thomas Pynchon and as sardonically warm as the best of Kurt Vonnegut. . . A masterful and humane gem of a novel.” —Shaun Hamill, author of A Cosmology of Monsters

Blending the piercing humor of Alexandra Kleeman and the jagged satire of Black Mirror, an audacious, eerily prescient debut novel that chronicles the rise and fall of a massive high-rise housing complex, and the lives it affected before - and after - its demise.

Standing nearly five hundred stories tall, Los Verticalés once bustled with life and excitement. Now this marvel of modern architecture and nontraditional urban planning has collapsed into a pile of rubble known as the Heap. In exchange for digging gear, a rehabilitated bicycle, and a small living stipend, a vast community of Dig Hands removes debris, trash, and bodies from the building’s mountainous remains, which span twenty acres of unincorporated desert land.

Orville Anders burrows into the bowels of the Heap to find his brother Bernard, the beloved radio DJ of Los Verticalés, who is alive and miraculously broadcasting somewhere under the massive rubble. For months, Orville has lived in a sea of campers that surrounds the Heap, working tirelessly to free Bernard—the only known survivor of the imploded city—whom he speaks to every evening, calling into his radio show.

The brothers’ conversations are a ratings bonanza, and the station’s parent company, Sundial Media, wants to boost its profits by having Orville slyly drop brand names into his nightly talks with Bernard. When Orville refuses, his access to Bernard is suddenly cut off, but strangely, he continues to hear his own voice over the airwaves, casually shilling products as “he” converses with Bernard.

What follows is an imaginative and darkly hilarious story of conspiracy, revenge, and the strange life and death of Los Verticalés that both captures the wonderful weirdness of community and the bonds that tie us together.

Sean Adams is a graduate of Bennington College and the Iowa Writers’ Workshop. The Heap is his first novel.

“Like Snowpiercer's train, a George Saunders amusement park, or the fractured cityscape from a Donald Barthelme story, The Heap's Los Verticalés is a sardonic monument to our decadent culture teetering on the brink of collapse. A wry, inventive, and highly original debut.”
— Chandler Klang Smith, author of The Sky Is Yours

"The Heap is dizzying in scale, but at its heart it's an endearing and downright fun story about a man who defies all odds to reestablish a familial link that's been sundered by technology, catastrophe and commerce. . . . The first great science fiction novel of 2020, The Heap is sharp, acidic and sweet."
— NPR

“Somehow both timely and timeless, The Heap explores with heart what it means to live in the wake of strange new kinds of catastrophe.”
— Seth Fried, author of The Municipalists

“As intellectually playful as the best of Thomas Pynchon and as sardonically warm as the best of Kurt Vonnegut, The Heap is both a hilarious send-up of life under late capitalism and a moving exploration of the peculiar loneliness of the early 21st century. A masterful and humane gem of a novel.”
— Shaun Hamill, author of A Cosmology of Monsters

“An incandescent, melancholy satire. . . . Fans of Borges and other inventive but piercing stories will revel in this offbeat novel.”
— Publishers Weekly

"A sharp, evocative look at human arrogance and the sense of community we build after tragedy."
— Library Journal

“A dystopian nightmare that is metaphorical in nature but has a compelling story. . . . A vision of the future that gives the working class a chance to get even.”
— Kirkus Reviews

"A deeply weird but poignant novel about the extended family we discover amongst the rubble and ruin of a rich man's folly."
— Locus