What to Do When Someone Dies: A Novel (Paperback) 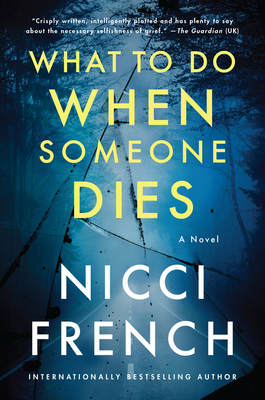 In this ingenious stand-alone thriller from the internationally bestselling author and “razor sharp” master of suspense (People), a grieving wife is forced to ask: Which is worse—infidelity or murder?

Ellie Falkner’s world has been destroyed. Her husband, Greg, died in a car crash—and he wasn’t alone. In the passenger seat was the body of Milena Livingstone, a woman Ellie’s never heard of. But Ellie refuses to leap to the obvious conclusion, despite the whispers and suspicions of those around her. Maybe it’s the grief, but Ellie has to find out who this woman was—and prove Greg wasn’t having an affair. And soon she is chillingly certain their deaths were no accident.

Are Ellie’s accusations of murder her way of avoiding the truth about her marriage? Or does an even more sinister discovery await her?

Nicci French is the pseudonym of English wife-and-husband team Nicci Gerrard and Sean French. Their acclaimed novels of psychological suspense have sold more than 8 million copies around the world.

“Crisply written, intelligently plotted and has plenty to say about the necessary selfishness of grief.”
— The Guardian

"Razor-sharp writing by French expertly amps the tension."
— People on The Lying Room

“An ingenious twist on the locked-room mystery. French continues to impress.”
— Publishers Weekly on House of Correction

“Attention, fans of Tana French and Ruth Ware: meet your new obsession . . . The Lying Room ranks among French’s very best, a thriller as combustible as gunpowder, as propulsive as a jet engine. Psychological suspense at its brightest and most blazing.”
— A.J. Finn, #1 New York Times bestselling author of The Woman in the Window

“This well-written, psychological thriller has a gripping plot that will satisfy fans of Val McDermid and Sharon J. Bolton.”
— Library Journal

“[If you] are drawn to excellent psychological suspense . . . this is a book for your 'must list.'”
— Popular Culture Association

"Such an enjoyable ride."
— Culteress

"An enthralling and addicting novel . . . Longtime fans of French will find their high expectations rewarded, while newcomers will be motivated to explore the author’s backlist. I envy their discovery."