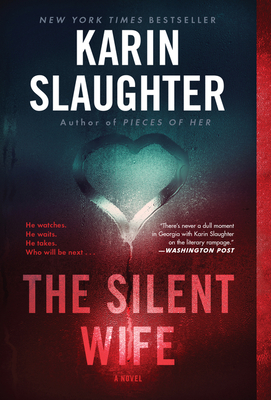 The New York Times bestselling author of Pieces of Her returns with the next novel in the Will Trent series that “comes with just the right amount of twists, turns, shocks, surprises and domestic thrill and shrill” (Parade).

Investigating the killing of a prisoner during a riot inside a state penitentiary, GBI investigator Will Trent is confronted with disturbing information. One of the inmates claims that he is innocent of a brutal attack for which he has always been the prime suspect. The man insists that he was framed by a corrupt law enforcement team led by Jeffrey Tolliver and that the real culprit is still out there—a serial killer who has systematically been preying on women across the state for years. If Will reopens the investigation and implicates the dead police officer with a hero’s reputation of wrongdoing, the opportunistic convict is willing to provide the information GBI needs about the riot murder.

Only days ago, another young woman was viciously murdered in a state park in northern Georgia. Is it a fluke, or could there be a serial killer on the loose?

As Will Trent digs into both crimes it becomes clear that he must solve the cold case in order to find the answer. Yet nearly a decade has passed—time for memories to fade, witnesses to vanish, evidence to disappear, and lies to become truth. But Will can’t crack either mystery without the help of the one person he doesn’t want involved: his girlfriend and Jeffrey Tolliver’s widow, medical examiner Sara Linton.

When the past and present begin to collide, Will realizes that everything he values is at stake . . .

Karin Slaughter is the author of more than twenty instant New York Times bestselling novels, including the Edgar–nominated Cop Town and standalone novels Pretty Girls, The Good Daughter, and Pieces of Her. She is published in 120 countries with more than 40 million copies sold across the globe. Pieces of Her is a Netflix original series starring Toni Collette, and False Witness, the Grant County, and Will Trent series are in development for television. Slaughter is the founder of the Save the Libraries project—a nonprofit organization established to support libraries and library programming. A native of Georgia, she lives in Atlanta.

"Slaughter has said she wants to make violence against women real to people who don’t get it. She succeeds in The Silent Wife . . . [readers] will eat up."  — Washington Post on The Silent Wife

"If you want to be chilled to the bone, pick up Slaughter's latest, The Silent Wife . . .  it's absolutely mesmerizing." — Popsugar on The Silent Wife

“Slaughter adds depth to her best-selling series with the investigations of old and current cases, while also advancing the key personal relationship. Another slam dunk.” — Booklist (starred review) on The Silent Wife

"Slaughter delivers an unflinching, deeply empathetic exploration of the stigma surrounding rape and the enduring trauma suffered by its survivors." — Publishers Weekly on The Silent Wife

"As one can only expect from a Karin Slaughter crime thriller, her latest book The Silent Wife comes with just the right amount of twists, turns, shocks, surprises and domestic thrill and shrill that will keep longtime fans of her Will Trent series on their toes—and welcome new readers to the party." — Parade on The Silent Wife

"Karin Slaughter knows how to craft a character. . . . Slaughter’s fans know exactly what they’re in for when they pick up one of her thrillers, but there’s nothing formulaic about them—that spine-tingling chill her stories evoke is largely organic." — The Big Thrill on The Silent Wife

"One of the most popular series in current crime reading . . . love it for the interesting detective work, but also for the evolution in Sara's life. . . . Irresistible." — The Globe and Mail on The Silent Wife

"Splendid . . . When it comes to intricate plotting nothing daunts Slaughter and she’s in prime form." — The Toronto Star on The Silent Wife

"The emotionally sophisticated characters work through the brutality of their jobs in this dynamic psychological thriller and police procedural that will please readers of Slaughter’s “Grant County” series. For fans of Meg Gardiner, David Baldacci, and Carrie Smith." — Library Journal on The Silent Wife

“Her characters, plot, and pacing are unrivaled among thriller writers, and if you haven’t yet read her, this is the moment.” — Michael Connelly, New York Times bestselling author

“It’s Slaughter’s prodigious gifts of characterization that make her stand out among thriller writers.” — Washington Post

“Her talent is the equivalent of an Edgar Allan Poe or a Nathaniel Hawthorne . . . An exemplary storyteller, weaving her words with skill and intelligence. She will be recognized as one of the great talents of the 21st century and will hold an honored place in the realm of world literature.” — The Huffington Post

“There’s never a dull moment in Georgia with Karin Slaughter on the literary rampage.” — Washington Post on The Last Widow

“[The Last Widow] does what all great Slaughter books do: keeps you on the edge of your seat. It’s a chilling whodunit for our times.” — Parade on The Last Widow

“With a well-written, intriguing plot and an edge-of-the-seat ending, this is sure to keep readers up late into the night.” — Library Journal (starred review) on The Last Widow

“Slaughter’s work is like a professional athlete coming to the playground to show the kids how it’s done. With her themes, tensions and metaphors, she has a talent for classic literature that is often missing in recent fiction.” — RT Book Reviews

"An all-time HQ fave . . . it gets dark. This one goes out to the twisty thriller fans."
— theSkimm on The Silent WIfe