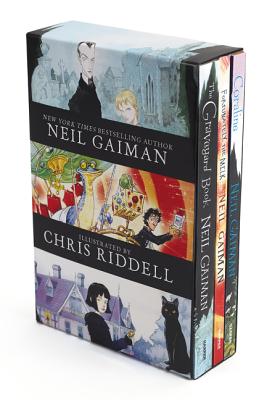 The editions of the Newbery Medal and Carnegie Medal winner The Graveyard Book; Coraline; and Fortunately, the Milk in this box set contain the illustrations from the British editions, which are both hilarious and moving. Chris Riddell has won the Kate Greenaway Medal twice, among other awards and honors.

These paperbacks have never before been published in the United States and are available here only in this special box set.

Neil Gaiman is a #1 New York Times bestselling author of books for children and adults whose award-winning titles include Norse Mythology, American Gods, The Graveyard Book, Good Omens (with Terry Pratchett), Coraline, and The Sandman graphic novels. Neil Gaiman is a Goodwill Ambassador for UNHCR and Professor in the Arts at Bard College.

Chris Riddell is an acclaimed British artist who lives in Brighton, England. He has written and illustrated many books of his own, including Ottoline and the Yellow Cat and Ottoline Goes to School, and has illustrated, for Bloomsbury UK, The Graveyard Book; Coraline; and Fortunately, the Milk; as well as The Sleeper and the Spindle.