Rebbe: The Life and Teachings of Menachem M. Schneerson, the Most Influential Rabbi in Modern History (Hardcover) 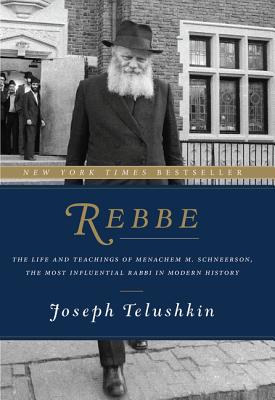 “One of the greatest religious biographies ever written.” – Dennis Prager

In this enlightening biography, Joseph Telushkin offers a captivating portrait of the late Rabbi Menachem Mendel Schneerson, a towering figure who saw beyond conventional boundaries to turn his movement, Chabad-Lubavitch, into one of the most dynamic and widespread organizations ever seen in the Jewish world. At once an incisive work of history and a compendium of Rabbi Schneerson's teachings, Rebbe is the definitive guide to understanding one of the most vital, intriguing figures of the last centuries.

From his modest headquarters in Crown Heights, Brooklyn, the Rebbe advised some of the world's greatest leaders and shaped matters of state and society. Statesmen and artists as diverse as Ronald Reagan, Robert F. Kennedy, Yitzchak Rabin, Menachem Begin, Elie Wiesel, and Bob Dylan span the spectrum of those who sought his counsel.  Rebbe explores Schneerson's overarching philosophies against the backdrop of treacherous history, revealing his clandestine operations to rescue and sustain Jews in the Soviet Union, and his critical role in the expansion of the food stamp program throughout the United States. More broadly, it examines how he became in effect an ambassador for Jews globally, and how he came to be viewed by many as not only a spiritual archetype but a savior. Telushkin also delves deep into the more controversial aspects of the Rebbe's leadership, analyzing his views on modern science and territorial compromise in Israel, and how in the last years of his life, many of his followers believed that he would soon be revealed as the Messiah, a source of contention until this day.

Joseph Telushkin is a rabbi, scholar, and bestselling author of eighteen books, among them A Code of Jewish Ethics and Words That Hurt, Words That Heal. His book Jewish Literacy is the widest-selling work on the topic of Judaism. He lives with his wife, Dvorah, in New York City, and lectures regularly throughout the United States.

“[An] excellent new biography of Chabad’s great 20th-century leader… For all his immense achievements, the Rebbe’s power ultimately came from a simple message that anyone can appreciate. As Mr. Telushkin puts it: ‘Love your fellow, and not just those who agree with you….’ Mesmerizing.” — Wall Street Journal

“Through his clear and unambiguous prose cultivated from many sources, Telushkin recounts how the Rebbe fundamentally transformed notions of human potential, as he believed individuals were capable of much more than we imagine for ourselves... Rebbe will be a staple of rabbinic biography for years to come.” — Huffington Post

“The subtitle’s claim that Schneerson was the modern world’s most influential Jewish religious leader is proven throughout this highly readable book… Readers are left to draw their own assessment from the wide-ranging portrait… Fascinating.” — Booklist (starred review)

“A vivid, panoramic view of Rabbi Schneerson-in each of his many roles as dynamic spiritual leader, inspiring teacher, and even motivating life coach and management guru… Telushkin’s Rebbe is a man in constant motion, a non-stop whirlwind of faith-driven energy and action possessed of a spiritual calm.” — The Jewish Week

“An admiring but honest look at Schneerson and his legacy… What stands out is Schneerson’s engagement with the principles by which he managed to wield a considerable influence upon the American cultural scene and the Jewish world… An engaging account.” — Publishers Weekly

“Well-qualified to write about his subject, [Telushkin] draws on Schneerson’s public statements as well as his voluminous correspondence and his thousands of private audiences, with his followers and others, both Jewish and non-Jewish. An approachable and admiring introduction appropriate for readers interested in modern Jewish thought.” — Kirkus Reviews

“One of the greatest religious biographies ever written. Generations from now, Rebbe will be read by people of every faith.” — Dennis Prager, national talk show host and New York Times bestselling author of Still the Best Hope

“Whether you are a believer, an admirer or a respectful skeptic, you will learn much from this deep and accessible account of a truly great man by a great writer.” — Alan M. Dershowitz, professor emeritus, Harvard Law School, and author of Taking the Stand

“Joseph Telushkin’s earthbound study introduces ‘the most influential rabbi in modern history’ by documenting the incremental process through which his influence was acquired… Illuminating.” — Commentary Magazine

“Telushkin offers a rounded portrait of life in the shadow, or the sunlight, of the Rebbe. We meet dozens of followers and hear their stories, get a feel for the texture of their devotion, for why they loved him… It is worth studying how and why his method worked.” — The Jewish Daily Forward

“[Rebbe] should be in the personal library of Americans of every faith.” — Front Page Magazine

“[Rebbe] is an enjoyable book to read, with insights and perspectives as well as details that inform and engage, shedding light on a towering, influential figure.” — Chicago Jewish Star

“With this book, the Rebbe no longer is incomprehensible. Spend some time getting to know the Rebbe. You’ll be glad you did.” — Jewish Herald Voice

“To understand why he inspired so many, do yourself a favor and pick up this moving, new biography. You don’t need to be a Jew or even be a religious person to learn from this monumental man.” — New York 1

“Rebbe is that extremely rare thing: a perfect book about a perfect man. [It] brings the great man alive and gives the reader powerful motivation to examine his own life... The Rebbe touched the lives of millions; through Telushkin’s book, he will touch the lives of many more.” — NY Journal of Books