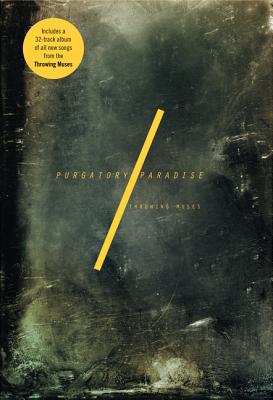 Purgatory/Paradise is a revolutionary fusion of music and text from seminal indie rock band Throwing Muses.

Kristin Hersh, Throwing Muses’s lead singer/songwriter, is one of the most well-respected musicians to emerge from the 1980s indie rock scene. Her work has influenced artists such as Cat Power, Alanis Morrissette, Lush, and Sleater-Kinney, as well as Riot Grrrls everywhere.

Ten years in the making, Hersh and Throwing Muses’s 32-track album Purgatory/Paradise is the centerpiece of this deluxe 64-page book which also contains more than two dozen photographs and artwork by Kristin Hersh and band member Dave Narcizo; lyrics for each song; stories and essays that accompany each track written by Hersh; and instructions for downloads of exclusive content, including demos and outtakes.

Purgatory/Paradise is a . . . gorgeous, interactive art book . . . Hersh’s lyrics and stories would make it a compelling read even without the music. — Boing Boing

Purgatory/Paradise was devised both as a record and as a book, with essays by Hersh and art by Narcizo. It’s both a gorgeous standalone object . . . and a sort of decoder for the album’s tracks . . . — Pitchfork

Nothing short of epic . . . wrenching, alarming, disturbing, and occasionally seasoned with bits of dark humor . . . . a stunning psychological ride. Like the most powerful of drugs. . . it’s the stuff addictions are made of. — American Songwriter, four stars

Triumphant . . . fresh and expansive . . . What is clear is that this record, and book, which call into question what records and books and can and should do, how they can and should interact, still delivers in a basic, thrilling way. — Popmatters

Both brutal and magical . . . written with unimaginable warmth and such goofball humor, a perfectly imperfect encapsulation of what makes Hersh’s work so fortifying even as it devastates. — Popdose

“One of America’s finest songwriters.” — Simon Reynolds, author of Rip It Up and Start Again: Postpunk 1978-84

Praise for Rat Girl: “Hersh has pretty much been to hell and back and lived to tell the tale...extremely well written.” — Huffington Post

“With its reined in plot line and ethereal prose style, Rat Girl reads more like a novel...a pleasure to read.” — Slate

“A thoroughly engrossing work by an original voice-hopefully the first of many.” — Kirkus Reviews (starred review)