Bitter Brew: The Rise and Fall of Anheuser-Busch and America's Kings of Beer (Paperback) 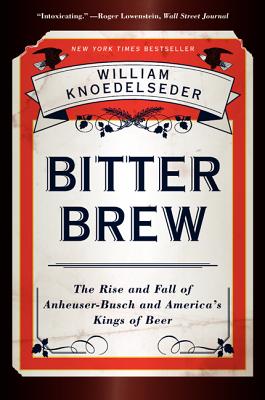 “Bitter Brew deftly chronicles the contentious succession of kings in a uniquely American dynasty. You’ll never crack open a six again without thinking of this book.”
—John Sayles, Director of Eight Men Out and author of A Moment in the Sun

The creators of Budweiser and Michelob beers, the Anheuser-Busch company is one of the wealthiest, most colorful and enduring family dynasties in the history of American commerce. In Bitter Brew, critically acclaimed journalist William Knoedelseder tells the riveting, often scandalous saga of the rise and fall of the dysfunctional Busch family—an epic tale of prosperity, profligacy, hubris, and the dark consequences of success that spans three centuries, from the open salvos of the Civil War to the present day.

William Knoedelseder is the New York Times bestselling author of Bitter Brew: The Rise and Fall of Anheuser-Busch and America’s Kings of Beer, as well as the critically acclaimed Stiffed: A True Story of MCA, the Music Business, and the Mafia. His book I’m Dying Up Here: Heartbreak and High Times in
Stand-Up Comedy’s Golden Era is the basis for the Showtime series of the same name. He lives in Los
Angeles, California.

“Bitter Brew deftly chronicles the contentious succession of kings in a uniquely American dynasty. You’ll never crack open a six again without thinking of this book.”
— John Sayles, Director of "Eight Men Out" and author of A Moment in the Sun

“As the Busch family goes, so goes America. Bill Knoedelseder has taken their multi-generational saga and boiled it down into a heartfelt, hilarious ode to beer, baseball and business.”
— Michael London, Academy Award-nominated producer of "Sideways"

“A great American story told as well and it could be told. I’ll never drink a Bud the same way again.”
— Larry Leamer, bestselling author of the Kennedy family trilogy, The Kennedy Women, The Kennedy Men and Sons of Camelot

“An engrossing behind-the-scenes look at one of America’s most successful and familiar brands.”
— Kirkus Reviews

“…well-written, and thoroughly documented company history…VERDICT A real-life family saga, this book is full of domestic and company details, some of which are sordid, others commendable. Recommended for readers interested in the backstory behind the King of Beers.”
— Library Journal

“An engrossing saga of the Busch family, one of the wealthiest, longest-lasting, and most colorful family dynasties in the history of American commerce.”
— USA Today

“[I]ntoxicating reading... This is a lurid, fascinating tale, which narrowly escapes the charge of being sensationalist thanks to its factual grounding and the significance of its subject-a family business that managed to dominate an industry but could not get its own dysfunction under control.”
— Wall Street Journal